Drone Owners, Here's What To Know Before Taking Flight 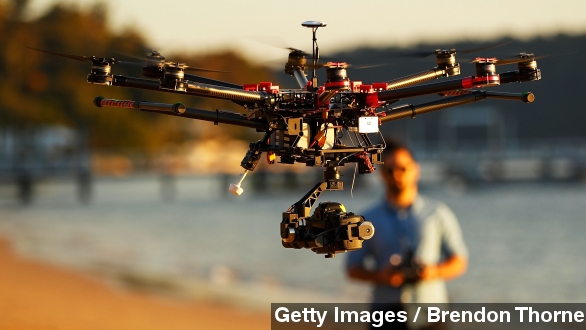 As drones become more popular in the U.S. there's plenty of confusion about how they can be used without breaking the law.

There are a lot of personal drones in the U.S. — Amazon reportedly sells 10,000 each month. And there's a lot of confusion about how you can use them without breaking any laws. So we're answering some frequently asked questions. Call it our drone "know fly list."

First what is OK. If you're flying a drone recreationally, under 400 feet, and always within eyesight, you're pretty much in the clear.

But can drones be flown near an airport or in airspace that could be populated by an airplane? No. (Video via Postandfly)

The potential for collision with drones is a major risk factor for airplanes in the air. Here's how one FAA official explained it last May. (Video via CNN)

Can drones be flown for commercial purposes like wedding photography or land surveys? (Video via BP)

Legally, not without specific approval from the FAA, and the first commercial drone use permit was issued just last June to BP. (Video via AeroVironment)

And when those wedding photographers do get approved for a permit, take care. (Video via YouTube / WeddingMan123)

Can drones be flown for business purposes, like to develop new technology? (Video via YouTube / Marque Cornblatt Prod.)

Not unless the FAA approves the use with either a Special Airworthiness Certificate–Experimental Category, or a Certificate of Waiver or Authorization. (Video via Bloomberg)

Flying drones for recreational purposes is a lot like flying model airplanes for which the FAA has a list of "dos and don'ts" – like contact airport control if you're flying within five miles of an airport and keep the aircraft under 55 pounds. (Video via Tested)

The FAA does allow drone use by governmental organizations with specific conditions and limitations. And the agency is reportedly on the verge of proposing new rules for commercial drone use — although it could still be several years before they are finalized. (Video via CNBC)

Until then, be careful. (Video via YouTube / Sondra T.)