Drought Conditions Continue To Worsen In The Western U.S. 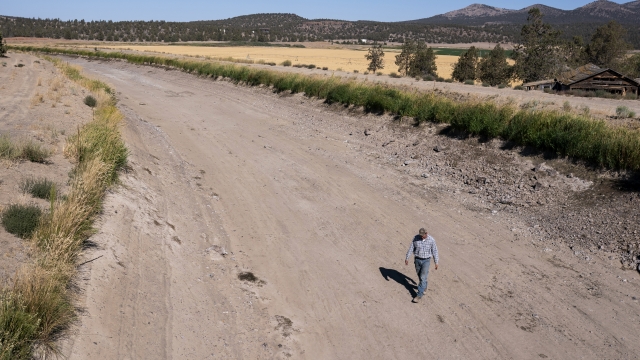 74% of the Pacific Northwest is experiencing drought conditions, with the region's rain and snow season set to end in April.

The drought in the Western United States shows no signs of relief, and there are new warnings two states could face even worse conditions than last year.

Conditions are still bad and will likely be significant this summer and fall in California, but climatologists are now saying the drought is going to be much worse in Oregon and Idaho this year.

Large numbers of people are being displaced by worsening weather extremes. But some of these risks can be prevented or lessened with prompt action.

Scientists say it will be worse than the past two years and residents should prepare now for severe drought, large wildfires and record-low stream flows — which will impact salmon supply.

This 22-year "megadrought" is the worst in the last 1,200 years — and climate change is part of of the problem. The fire risk for central Oregon is predicted to be above normal starting in May — one of the earliest starts to the fire season in the state's history.

Seventy-four percent of the Pacific Northwest is experiencing drought conditions. More than 90% of Oregon is in some level of drought. The same can be said for 84% of Idaho.

The winter and spring is when the states get most of their water, but the La Niña weather pattern and warming northern Pacific Ocean waters have impacted precipitation, and there are no big storms predicted for the region.

This year's winter weather wasn't enough to snap the megadrought as 59% of the U.S. is dealing with some level of drought conditions. That's up slightly from last week and up dramatically from the same time last year.

The rain and snow season along the West Coast ends in April, so there are only a few weeks left to fill the reservoirs. However, many climatologists have lost hope for a "miracle March" to end — or even improve — the drought in the entire Western United States.