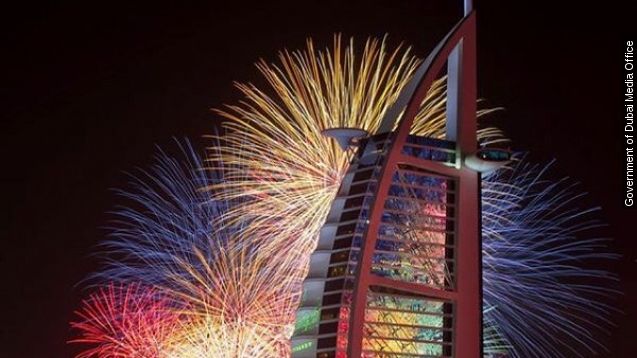 A fire at the Address Hotel injured several people but was contained quickly enough to not interfere with the New Year's Eve festivities.

The excitement surrounding one of the largest and most popular New Year's Eve celebrations in the Middle East was a little spoiled after a fire at the Address Hotel in Dubai. (Video via Government of Dubai Media Office)

According to the government's media office, the fire started outside the hotel on the 20th floor but never spread inside. Fourteen injuries were reported, but the government says all of those people received medical attention. (Video via CNN)

The fire started shortly before the fireworks began with people already lining up to see the show.

"I turned around and saw what y'all are seeing pictures of and within 10 seconds it went from 'wow, it's a fire' to 'we need to not be where we are,'" Josh Gatlin, an American in Dubai, told CNN.

Despite the hotel being just about a mile away, the government decided the fire wasn't enough to stop the party. (Video via Government of Dubai Media Office)

This is the second time this year a fire has stared at one of Dubai's huge skyscrapers. On Feb. 21, a fire at the Marina Torch Tower is said to have destroyed more than 100 apartments, leaving some residents still homeless to this day.

Guests at the Address Hotel were evacuated and placed elsewhere by the Dubai Department of Tourism. So far, no word on what caused the fire. The government says 90 percent of the fire is contained. (Video via NBC)