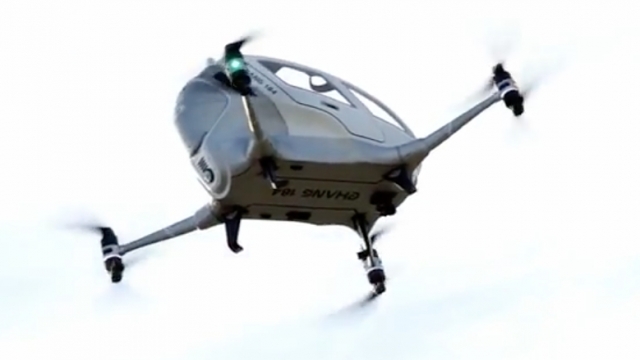 Dubai has a goal of having 25 percent of its trips driverless by 2030.

Roads and Transport Authority of Dubai

It's home to indoor skiing, the world's tallest building and soon, traveling by drone.

The city of Dubai announced Monday people will soon be able to get around the city using autonomous aerial vehicles.

The vehicle fits a person up to 220 pounds and a small suitcase, according to a video released by the city's Roads and Transport Authority. The vehicle has a battery life of 30 minutes and can travel within 24 to 31 miles.

Other than putting on a seat belt and selecting a destination, the traveler doesn't need to do much else.

A command center keeps tabs on the vehicle during the flight.

So why now, and why Dubai? It appears the city is meeting a challenge from its ruler head on.

The US Is Testing Micro-Drone Swarms Deployed From Fighter Jets

The micro-drones use collective decision-making to execute missions.

Last year, Sheikh Mohammed bin Rashid Al Maktoum — who is also the vice president and prime minister of the UAE —announced a strategy to make 25 percent of trips driverless by 2030.

The city is also testing a 10-seat electric driverless shuttle.

The head of the Roads and Transport Authority said Monday he hopes the new method of travel will get off the ground by July.