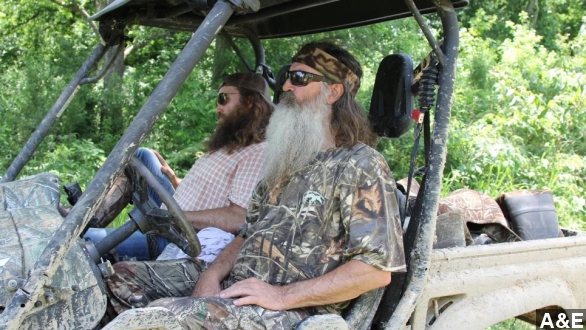 "Duck Dynasty" patriarch Phil Robertson has been getting some extra attention lately — not for his on-air quips, but for homophobic remarks he made in a recent interview with GQ Magazine.

"Robertson makes several explicit comments about gay people in the article. He calls gay people sinners and says they're not logical." (Via KVVU)

Robertson called himself a Bible thumper and had a lot to say about what he considers immoral.

In a very vulgar way, he said he couldn't understand why some men are attracted to other men and vice versa. And he said: (Via GQ Magazine)

Us Weekly says Robertson grouped gays with both terrorists and drunkards. After his comments, he paraphrased Corinthians from the Bible.

"We're not quite as outspoken as my dad, but I'm definitely in line. If somebody asks, I tell 'em what the Bible says."

The Gay and Lesbian Alliance Against Defamation, or GLAAD, condemned Robertson's remarks. (Via A&E)

"Says GLAAD spokesman Wilson Cruz: 'Phil and his family claim to be Christian, but Phil's lies about an entire community fly in the face of what true Christians believe. ... Phil's decision to push vile and extreme stereotypes is a stain on A&E." (Via USA Today)

Robertson has since issued a statement saying he would never treat anyone with disrespect just because they were different and that he loves all of humanity. As of Wednesday afternoon, A&E had still remained mum on the issue.