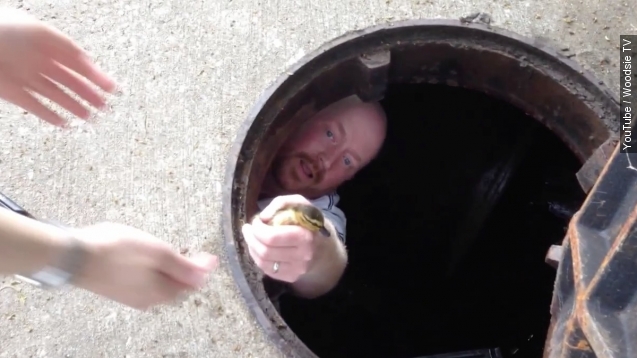 A Kansas City man took quite the initiative to save a distressed duckling stuck in a storm drain.

"There's a duckling stuck in a storm drain. We're gonna get him out somehow."

This is John Woods — better known as Woodsie — and if this rescue mission doesn't warm your heart, you may not have a pulse.

Woodsie says a small baby duck somehow fell into a storm drain after flood waters had swept through the Kansas City area.

Luckily, Woodsie came across the duckling in distress. While feeding some of its relatives, he told us he heard a strange sound.

"I kept hearing this peeping sound. I thought it was just an echo, like bouncing off the pond from where the ducks were, and then it didn't go away, so I went down and looked in the storm drain and there's this little tiny duck trying to hop up the wall," Woods said.

That's when Woodsie decided to get a little crafty.

"Alright, I got a crowbar and I'm gonna see if I can pry open the manhole cover," Woodsie said.

And, he did just that. Once he pried the manhole cover open, white polo shirt and all, Woodsie climbed down a ladder into raw sewage, scooped the little fuzzy guy up and returned it to its much friendlier, conventional environment.

And, the effects on the bird seemed almost immediate.

Woodsie said he took matters into his own hands because he knew he could get the job done easily without having to wait for fire fighters or law enforcement to arrive.

"What do we do? Do we call the fire department? ... I knew we could get down there. I didn't want to waste city money to get one little duck out of the hole. ...  I'm hoping I don't get hit with a trespassing fee or something," Woods said.

He's also a photographer for our partners at KSHB and a pretty well known comedian in the online community. In fact, he has about 223,000 followers of his goofy Vine material, which is often at his children's expensive.

And, yes, his recent sewer-bound escapade certainly made the highlight reel.

"People love little fluffy baby ducks, getting out of trouble and being reunited with their moms," Woods said.

Yep, we couldn't have put it any better ourselves.