Where Was The National Guard When The Capitol Was Breached? 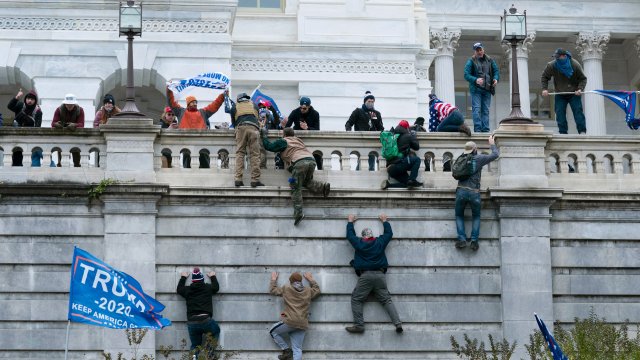 The delayed National Guard deployment at the Capitol stood in contrast to a June deployment in response to Black Lives Matter protests.

The violent assault on the Capitol, along with the response to the extremists, stood in stark contrast to images from other recent protests in Washington.

Pro-Trump extremists clashed violently with Capitol police, driving back law enforcement officers. They walked freely throughout the halls of the U.S. Capitol, making it all the way to the Senate floor. The scene forced many to ask one simple question: Where is the National Guard?

Washington, D.C., Mayor Muriel Bowser warned citizens to steer clear of downtown this week. Last week, she requested the National Guard be deployed as members of far-right groups, including the Proud Boys, openly signaled they planned to come out in force. The guard was activated to be on alert during protests, but not deployed to guard the Capitol.

That stands in stark contrast to the scene last June, after the president called in guard members from around the nation to face off not with a foreign adversary, but with peaceful protesters following the killing of George Floyd.

Downtown, Humvees, helicopters and federal officers joined troops from the National Guard -- some stationed across from the White House -- as peaceful protesters were cleared out to allow the president to have a now-infamous photo-op in front of St. John's Church.

In June, the president wanted a group of the nation's governors to follow suit, threatening to deploy the military to stop protests around the nation.

"If you don’t dominate your city and your state, they’re going to walk away with you," President Trump told a group of governors on a June 1 conference call. "And wait till I get in Washington and D.C., we’re going to do something that people haven’t seen before. But you’ve got to have total domination.”

But in 2021, armed protesters had overrun the capital of democracy itself long before the National Guard was deployed.