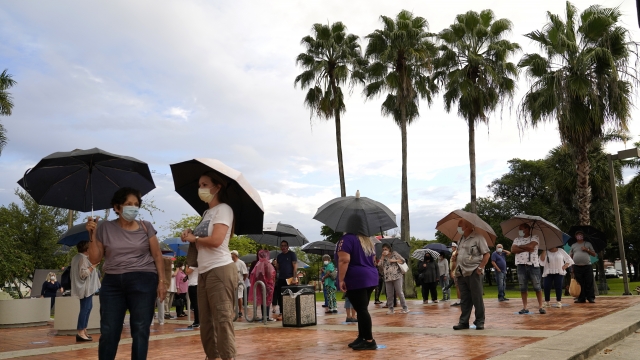 Floridians lined up to vote Monday as the first day of in-person voting kicked off in most of the state.

"I requested my ballot by mail and I didn't get it, so now I'm here today," said Claudia Tirado.

"I think this election is probably — in my lifetime, for sure — the most important election that we've ever had," said Tony Goudie. "I think we've become prisoners of the moment where we think every election's that way, but I actually believe that this election is going to impact generations."

For some in South Florida, that meant waiting hours in the rain.

Voters here in Miami-Dade County play a crucial role in deciding who gets the state's 29 electoral votes. To give you an idea of just how important Florida is, no candidate has won the White House without winning Florida since 1992.

"Florida is essentially a microcosm of the country in terms of its demography, its industries. So as goes Florida tends to go the rest of the nation," explained Casey Klofstad, a political science professor at the University of Miami.

The race in Florida is a tight one, according to the Real Clear Politics polling average, with only a couple of points separating Democratic presidential nominee Joe Biden and President Donald Trump from week to week. And both presidential candidates have made their pitches to voters here.

"We're going to win the state of Florida," the president said last week at a rally in Ocala, Florida.

"It's good to be back in Florida," Biden told supporters last week at an event in Pembroke Pines.

Their attention has been focused on a key demographic: seniors.

"Biden's agenda would be a catastrophe for Florida's seniors," the president said last week at a rally in Sanford, Florida.

"This president cares more about the stock market than he does about the well-being of seniors," Biden said at the Pembroke Pines event.

"Today, I had to come here on the kickoff of early voting in Florida because y'all are gonna make it happen," Harris said Monday at an event in Orlando.

The Sunshine State is also expecting a high number of mail-in ballots this year. Before polls opened on Monday for early in-person voting, over 2.5 million Floridians had already cast their ballots.