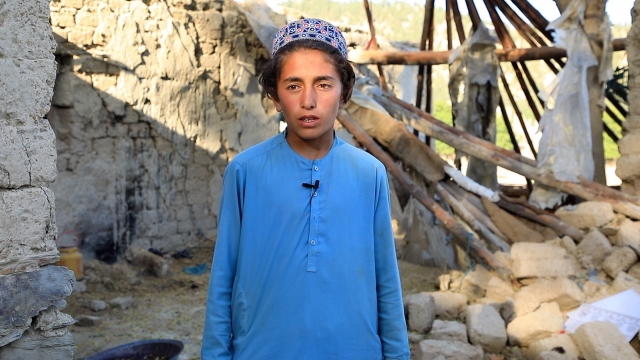 A remote area of mainly mud-brick villages crumbled and collapsed, killing at least 1,000 people. A total of 155 children died, and 55 were orphaned.

Newsy’s exclusive footage from an earthquake zone in Afghanistan shows that nearly a week after the deadliest earthquake there in decades, the humanitarian crisis is compounding the suffering.

A boy named Majullah says he woke up with his six other family members under bricks and dust. And even after he escaped, the Earth was still shaking.

"Our houses are totally collapsed and we can’t live in them anymore," he said. "There are no houses remaining to live in. People have nothing to even eat or wear."

With an estimated 10,000 homes destroyed, most victims are now sleeping in the open air.

Another man in the village says, "we haven’t eaten anything since then. We don’t have food.”

This was the desperate search for survivors after the dawn hours of June 22.  A 6.1 magnitude earthquake brought death and destruction to a country that is perhaps the least equipped in the world to handle it.

The quake’s epicenter was a southeastern region near the Pakistani border.

It was a remote, mountainous area of mainly mud-brick villages that crumbled and collapsed, killing at least 1,000 people. A total of 155 children died, and 55 were orphaned.

Even before the earthquake, nearly 20 million Afghans — which is nearly half the country — were going hungry.

"These are people who lived hand-to-mouth. These people who are unemployed. They're people who've lost their their farmland. You know, the backdrop here in Afghanistan is that we're suffering the worst drought for 37 years, there's a malnutrition crisis," said Sam Mort, the chief of communication at Unicef Afghanistan.

In the wake of the Taliban’s total takeover last summer, many aid organizations, for their own safety, pulled out of the country. Foreign aid dwindled, and the economy collapsed.

The Taliban’s state news agency has shown video of Taliban military doctors carrying boxes of medicine and rendering aid. Images of humanitarian acts are from a regime sanctioned for its human rights abuses.

Some complained to Newsy of receiving "insufficient help from the government."

For the Taliban, the audience that matters most are the world leaders who’ve frozen the country’s financial assets.

"So this is somehow unfortunately a good opportunity for the Taliban to get access to [that] money, claiming that they are going to help the Afghan people, but there's always the chance that they misuse that money because there is no accountability involved. I think the best approach would be to just you know, do not give them money just send the materials," said Mohammad Qadam Shah, the assistant professor of global development at Seattle Pacific University.

"The aid that has reached us is insufficient. We request that the World Food Program send us food. We have only received food and tents for 300 families," said Noor Ali Shah, an earthquake victim.

Aftershocks continue rattling the Earth, as families endure aftershocks of their own.