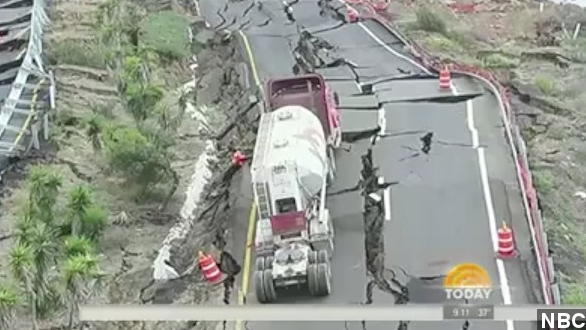 Relatively small earthquakes hit parts of the U.S., Mexico, Egypt, Turkey and Cyprus over the weekend.

An unusually large number of high-profile earthquakes sprung up across the globe over the weekend, causing extensive damage to a roadway in Mexico and leaving residents shaken in Southern Europe, Egypt and the U.S.

Saturday, an earthquake near the Mexico-U.S. border collapsed chunks of this 300-yard stretch of highway. (Via CNN)

"The road is about 60 miles south of Tijuana. It passes over geological fault. The earthquake ranged in magnitude from 1.3 to 4.3." (Via WABC)

There were — surprisingly — no injuries, but one truck driver hauling 36 tons of cement had to wait hours before being pulled to safety. (Via NBC)

That was followed by a 4.9-magnitude earthquake nearly 1,500 miles away around Naples, Italy, early Sunday morning. Residents reportedly slept in their cars in fear of aftershocks that might damage buildings. (Via U.S. Geological Survey)

In the U.S., Oklahoma dealt with several earthquakes over the last week with more striking over the weekend. Most were reported as minor between 2.0 magnitude and 4.9, but the Midwestern state has rarely dealt with earthquakes until recent years. (Via KOTV, Al Jazeera)

"We've had tornadoes and hail storms and all those kinds of things, but never earthquakes."

Great. So now Oklahoma has to be worried about the sky falling and the ground dropping out? Well, not quite — at least not to a very high degree.

According to the Incorporated Research Institutions for Seismology, magnitude 2 and smaller earthquakes general happen several times around the world daily, while bigger ones are more rare. A magnitude 8 or higher usually only happens about once a year.

Many of these reported earthquakes were between 2.0 magnitude and 4.9. No extensive damage was reported in the ones in Turkey, Italy and Oklahoma, and no injuries were reported in any of them.