Ebola Crisis Could Last Through Next Year 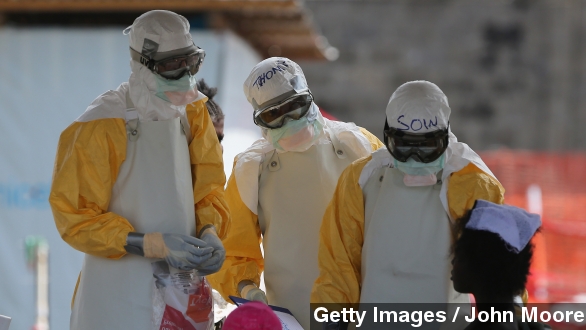 Peter Piot, one of the scientists who discovered Ebola in 1976, suggested the current outbreak could last through the end of 2015.

The biggest ever outbreak of Ebola could last through the end of 2015.

"We need to be ready for a long effort, a sustained effort [for] probably the rest of 2015."

In 1976, he helped discover the Ebola virus in what’s now the Democratic Republic of Congo. That outbreak, unlike this latest one, was quickly contained. (Video via Het Laatste Nieuws)

But this year, the virus has spiraled out of control in Liberia, Sierra Leone and Guinea, the three West African countries hardest hit by the epidemic. A delayed response time was a big reason for that.

It wasn’t until August — more than four months into the epidemic — that the World Health Organization declared a global health emergency.

With the virus already widespread, vaccine trials that would normally take years were fast-tracked. There is currently no proven immunization or treatment — which kills 70 percent of its victims. (Video via ODN)

But a new vaccine developed by U.S. researchers is offering “promising results,” according to the Lancet medical journal. Fifty-seven percent of volunteers who received it developed antibodies against Ebola.

Still, it could be years before any treatment is approved for use. Meanwhile, Sierra Leone, the country with the most Ebola patients, is again under lockdown. (Video via Doctors Without Borders)

The government has banned public Christmas and New Years parties and placed restrictions on travel.

Sierra Leone has overtaken Liberia as the worst affected country. Formerly the epicenter of the virus, the number of new cases in Liberia are leveling off, having been eliminated entirely in some hotspots. (Video via United Nations)