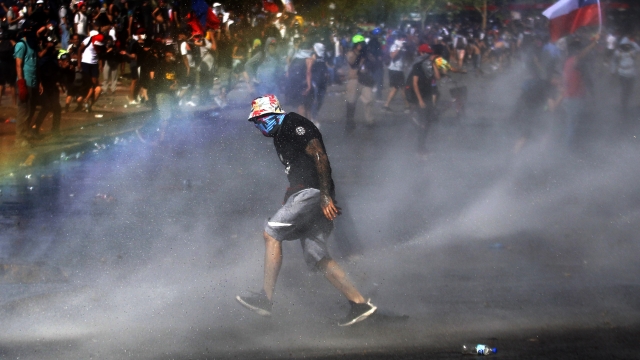 Eighteen people are dead in a week of protests and clashes in Chile that began over a subway fare increase. Unrest reveals deep economic fissures.

It's hard to imagine that the chaos unfolding in Chile, amid sirens, water cannon blasts and sporadic gunfire, all started over a 4 percent increase in subway fares. Now 18 people are dead in a week of protests and clashes.

Chile is just one of several countries across Latin America that is experiencing a social meltdown, fueled by economic uncertainty and rising anger among its people.

Even in Venezuela, embroiled in a continuing clash over the legitimacy of the socialist government of Nicolás Maduro, economic hardships are front and center.

Chile particularly stands out. The country of 18 million people has had one of the most vibrant, and fastest growing, economies in Latin America. But average Chileans face mounting debt, with little savings and rampant income inequality impacting the middle class.

The protests, starting with young people upset over the subway fares, have broadened to include high costs of electricity, education and health care, coupled with shrinking pensions.

Jorge Contesse, a law professor at Rutgers University, said: “For more than a decade now, studies have warned of the increasing frustration with the living conditions in Chile. Yet we keep being told that this was unforeseeable.”

Chile's National Human Rights Institute says more than 225 people have been injured in the uprising, in addition to those killed.

Piñera pinned blame on demonstrators, who have set fire to buses and at subway stations. He spoke of a “war against a powerful and implacable enemy.”

To some observers, those remarks fueled memories of the military coup and violent crackdown on dissent by former Chilean strongman Augusto Pinochet, who ruled from 1973 to 1988.

Human Rights Watch says the government has responded to protests with "an excess of force" by police and soldiers. And former president Michelle Bachelet, blamed Piñera’s rhetoric for making things worse. She said: “I’m deeply disturbed and saddened to see violence, destruction, deaths and injuries."