Economists Are Optimistic About The Economy, Voters Aren't 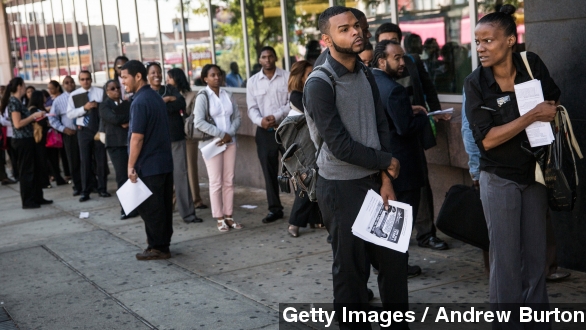 Voters and economists took opposing views of the U.S. economy this week, suggesting there is more to employment numbers than meets the eye.

Economists took an optimistic view of the U.S. economy this week.

JENNIFER WESTHOVEN VIA HLN: "Overall, economists do say this is just a solid report. The unemployment went down a tick. 5.8 percent taking it to the lowest since July 2008."

American voters, on the other hand, were decidedly pessimistic.

JOHN KING VIA CNN: "Nearly 8 in 10 voters going to the polls today say they're worried about economic conditions. So those lower unemployment numbers aren't reaching the American electorate. The just don't trust them just yet."

What's driving opposing views of the same economy? One big answer is wages.

JONNELLE MARTE VIA AL JAZEERA: "If you look back over the past several years wages have been flat...The number one reason people gave for not spending as much as they could was that they were waiting for a raise."

Economist Bob Brusca told Fox Business that many of the jobs being created were what he called, "lower tier."

BOB BRUSCA: "We're creating jobs, that's for sure. The unemployment rate is going down....But we're not really generating the kind of jobs that we need in order move people up in the world."

And don't forget the U.S. lost almost 9 million jobs during the recession. Gaining them back has been a long, slow process.

So what would a strong U.S. economy actually look like? Economist Tara Sinclair suggested to NPR more people would be quitting their jobs.

"The reason it's a good thing for people to be quitting their job is because that suggests that they're optimistic about their labor market choices."

And, of course, analysts are closely monitoring for when the Federal Reserve plans to raise interests rates, which would be a clear sign that it views the economy as recovered.

While a slow but steady economic recovery has led to speculation the Fed will take action sooner than later, it did Democrats no favors in last week's election.