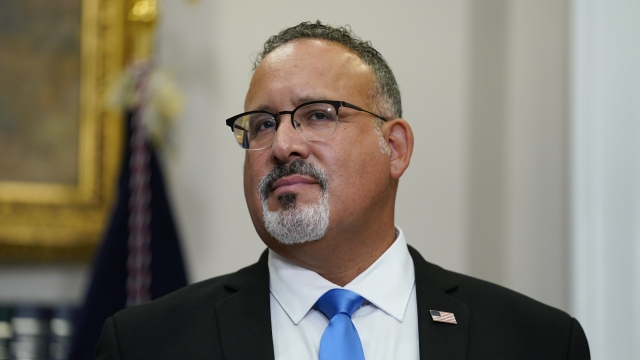 President Joe Biden announced Wednesday that the federal government is canceling student loan debt for tens of millions of Americans across the country.

Certain borrowers earning less than $125,000 annually — or families making less than $250,00 a year — will see up to $10,000 wiped away from their federal student loan debt. For recipients of Pell Grants, which are reserved for those with the most financial need, that forgiveness doubles to $20,000.

The president also announced he's extending a pause on federal student loan repayments through the end of the year.

President Biden is also extending a pause on federal student loan payments for what he called the "final time" through the end of 2022.

While some economists criticize the Biden administration's move as short-term relief — or even inflationary to the economy — U.S. Education Secretary Miguel Cardona called it an investment in Americans.

"I'm proud of the work we're doing for those folks who are going to take out loans in the future," he said to Newsy. "We're capping loan payments in the future to 5% of someone's salary — not 10%. That's called income-driven repayment. We're not going to ask folks to pay for more than they can afford."

However, critics say the loan forgiveness program is simply unfair to borrowers who worked to avoid debt or have already paid off their debt altogether, and some warn it will only worsen inflation.

"I am disappointed that this decision isn't really future-focused," said Ty Kiatathikom, an Ohio State University law student. "It's not going to do anything to lighten the load of future generations of college students."

Cardona said while not everyone will benefit from loan forgiveness, the package is aimed at helping middle-class working Americans get back on their feet post-pandemic.

"We recognize that there are others who are not going to be getting benefits," he said. "But with the income-driven repayment, everyone can benefit from that and it's going to help reduce payments for loans by 50%."

Meanwhile, President Biden's move to use executive action on loan forgiveness without going through Congress has sparked debate about fairness and probable legal challenges in the future.

Senate Minority Leader Mitch McConnell called the president's move "astonishingly unfair" and "a slap in the face to every family who sacrificed to save for college, every graduate who paid their debt, and every American who chose a certain career path" to avoid debt — like not going to college.

Cardona compared the loan forgiveness package to the government's pandemic-era investments in local businesses that sought to keep them afloat.