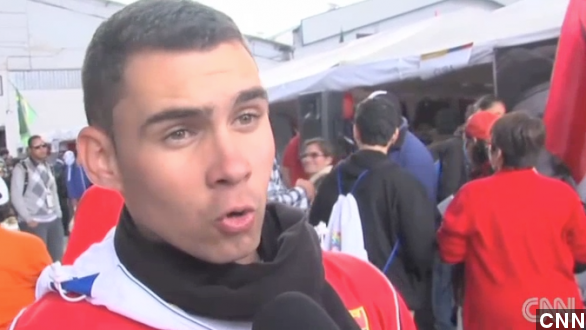 Shortly after his 20th birthday, the young man best known for his 1999 rescue attended a seminar in Ecuador and criticized the U.S. embargo of Cuba.

In the U.S., he's known as the scared little boy ripped from a relative's home in Florida by federal agents and returned to the very country his mother tried to escape. America, Elian Gonzalez grew up, and he's not a big fan of us.

"The message from me is that many others have died trying to reach American soil, but it is the American government itself with an unfair blockade that causes a critical economic situation inside of Cuba." (Via CNN)

Gonzalez's story was big enough after his Cuban mother drowned trying to get him to the U.S. in 1999, and the then-five-year-old was rescued clinging to an inner tube. (Via WFOR)

A bitter custody battle and infamous raid followed to return Gonzalez back to his father in Cuba.

"At the door, they knock three times, then barge in — eight agents sweeping the house ordering family members to the floor. Elian's in a closet ... Then, a waiting photographer snaps this defining image." (Via WPIX)

Gonzalez eventually returned with his father to a hero's welcome in Cuba. (Via WTTG)

Late last week, state-run media posted this article ahead of Gonzalez's 20th birthday. The young man reflected on a life with former president Fidel Castro attending every one of his birthdays since his return to Cuba. (Via Cubadebate)

Translated, he said, "Fidel Castro is a father to me. I do not profess any religion, but if so, my god would be Fidel Castro."

CNN reports Gonzalez now studies engineering at a military school in Cuba. His apparent first trip outside the country since returning with his father is for this week's World Festival of Youth and Students in Ecuador.