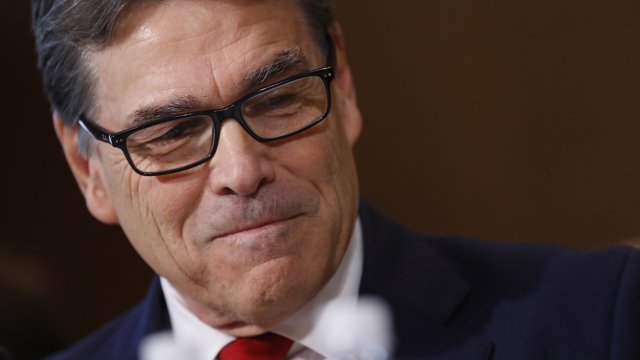 Sources told Politico he's expected to announce his resignation by the end of November.

Energy Secretary Rick Perry is reportedly getting ready to step down.

Politico broke the news Thursday. Sources told the outlet he's expected to announce his resignation by the end of next month, and Deputy Energy Secretary Dan Brouillette will take his place.

According to The Washington Post, Perry will likely return to the private sector after his departure.

A spokesperson for the Energy Department vehemently denied the reports. She said in a statement: "While the Beltway media has breathlessly reported on rumors of Secretary Perry's departure for months, he is still the Secretary of Energy. One day the media will be right. Today is not that day."

Perry led the American delegation to Ukrainian President Volodymyr Zelenskyy's inauguration earlier this year. Because of that, he's faced scrutiny from Democrats looking into President Donald Trump's political actions in the country. But sources say Perry's impending resignation has nothing to do with the Ukraine scandal.