Enforcement Of Electronic Log Rules For Truckers Begins This Week 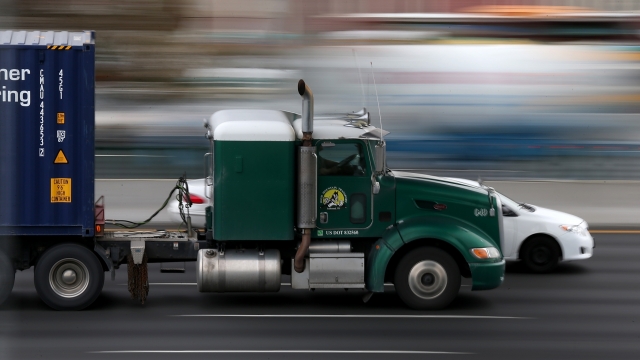 A Transportation Department agency reported in 2014 that rules like this one could prevent over 1,700 crashes a year.

Starting Tuesday, all motor carriers and truck drivers subject to the Federal Motor Carrier Safety Administration will be required to use electronic logging devices, or ELDs. The new rule is meant to improve road safety by limiting both total work hours and the time truckers spend behind the wheel.

The FMCSA is part of the U.S. Department of Transportation and oversees all commercial drivers in the U.S., including nearly 2 million long-haul truckers. Two years ago, the agency said truckers would have to install either an ELD or automatic onboard recording device. It gave them three months to make the change.

The nonprofit Commercial Vehicle Safety Alliance, or CVSA, will be in charge of enforcing the new rule. In a statement released Dec. 2, the CVSA said the mandate will not allow for any sort of "soft enforcement" or deadline extensions.

The group said the ELD rule will make "make it easier and faster to accurately track, manage and share record of duty status information." It will also prevent truckers from driving more than 11 hours or working more than 14 hours a day.

The FMCSA reported in 2014 that requiring ELDs to enforce hours-of-service rules could prevent more than 1,700 crashes a year. But some drivers and trucking companies have taken issue with the mandate. One longtime operator told Business Insider last year that the rules created "a hazardous race to beat the clock."

He said: "Drivers are now more reckless than ever trying to make it to their destination before the clock runs out with the mandatory breaks and such."

Kerri Wirachowsky is the director of the CVSA's roadside inspection program. She told Newsy that there has been no change to hours-of-service regulations, suggesting some drivers may have previously tried to modify their paper log to gain some time.

She said: "If you were able to make the same runs prior to implementation of ELDs in the same time as before and were logging your hours of service legally, you should be able to do the same now."

In August, the FMCSA responded to drivers' complaints and proposed five hours-of-service rule changes in a bid to "increase safety and flexibility." They included changes to how drivers can split up their off-duty time and adding two hours to shift limits when driving under adverse conditions.