Enrollment Down At Public Schools Around The Country 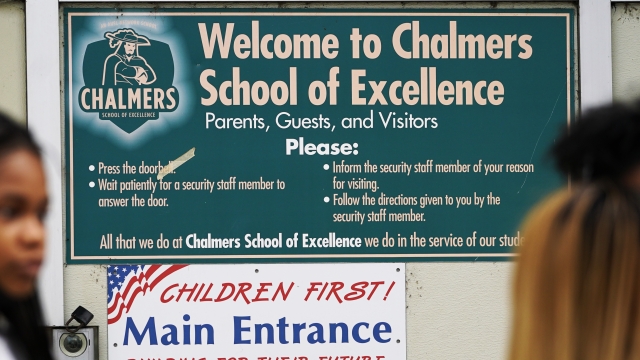 School enrollment is down significantly due to many parents homeschooling and enrolling their children in private schools.

Around the country, some school districts will begin the school year wondering, "Where is everybody?"

Daniel Anello is the CEO of Kids for Chicago.

"At least in Illinois, I know many other states, less kids means less resources coming to your district," said Anello.

Enrollment is down for public elementary schools. An analysis of last year's enrollment by AP and Chalkbeat found 1 in 3 Chicago schools now has fewer than 300 students. LA, New York and Boston are seeing similar trends in empty desks.

Shrinking enrollment may force some districts in places like Denver, Indianapolis, and Kansas City, Missouri, to close schools entirely. The Dickinson family in Wheaton, Illinois, says they were hesitant to pull their daughter out of school.

"The idea of taking Caroline out of school was frightening, but the idea of keeping her in the school, the way it was going with the just lack of, what's the wording — the lack of communication, consistency, the way it was run, it was just like months wasted," said Sarah Dickinson.

They started homeschooling when the pandemic hit; now they want to stick with it.

"It's been consistent, it's been rigorous, she's excelled and we couldn't be happier," said Dorian Dickinson.

While the pandemic may have contributed to the decline in traditional public school enrollment, there's more to this story.

"COVID has had an impact in some places, but those are micro impacts compared to the fact that we just as a country have a lot less babies that are growing up to be students," said Anello.

Kids First Chicago has studied the schools' slowdown. They say particularly in Chicago, enrollment declines are driven by the slowing growth of Latino families and a steady exodus of Black families out of the city.

Another contributing factor is that kids just aren't showing up, because of quarantines or other causes. In LA, 50% of students were considered chronically absent.

Hedy Chang is the executive director of Attendance Works.

"Chronic absenteeism has at least doubled nationwide. In some places, it's increased even higher because there's a lot of local variation," said Chang, who defines chronic absenteeism as missing 10% of school.

Now Attendance Works is seeing students miss as much as 50% or more of school.

"If you're looking at signs, you start to see it happening. And chronic absence is an early warning sign that kids might not re-enroll the following year," said Chang.

Like so many, Chang is looking for a solution.

"To keep kids in school, to keep kids staying connected, you really need to take what we call a tiered support that invests in prevention," she said.

Experts say growth is possible when families see schools as a place of community beyond the school day: A resource not just for education, but also for food and health care.