More Than A Dozen Texas Hazardous Waste Sites May Be Flooded, Damaged 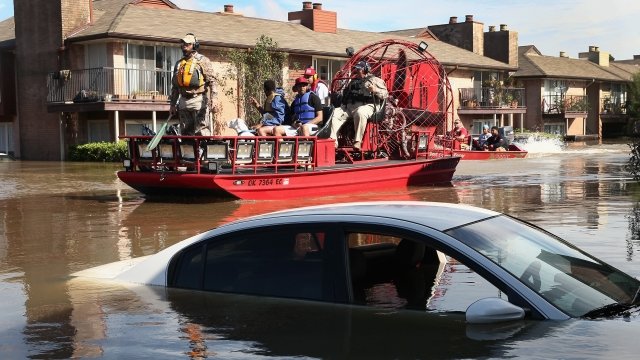 The EPA confirmed 13 of those sites in Texas are flooded and could be damaged after Hurricane Harvey.

Hurricane Harvey caused massive flooding in parts of Texas, and now residents are starting to worry about what could be in that standing water.

That's because Texas is home to dozens of "Superfund sites," or areas with high concentrations of hazardous waste and pollution.

On Saturday, the EPA confirmed 13 Texas Superfund sites are flooded or potentially damaged.

Superfund sites are known as being the most contaminated places in the country. Toxins found at some of the sites have been linked to birth defects and cancer.

President Donald Trump landed in Houston on Saturday to survey damage from Harvey and meet with survivors.

EPA Director Scott Pruitt said earlier this year that cleaning up Superfund sites was a priority for him, though he also backed a budget that would cut his agency's funding by at least 30 percent.

The EPA says its response teams have so far only been able to reach two of the 13 sites, neither of which was in the Houston area, and determined they weren't significantly damaged. It's unclear how much damage actually occurred.

But reporters at The Associated Press said they were able to access seven of the sites: one by boat, and six by vehicle or foot. The EPA didn't say why it hadn't been able to reach those sites, only calling them "inaccessible."

And while the agency didn't specifically mention the AP report, it did say a statement that "despite misleading and inaccurate reporting," it was working as quickly as possible to address the situation.

The agency says an inspection for at least one of the sites is planned for Monday.