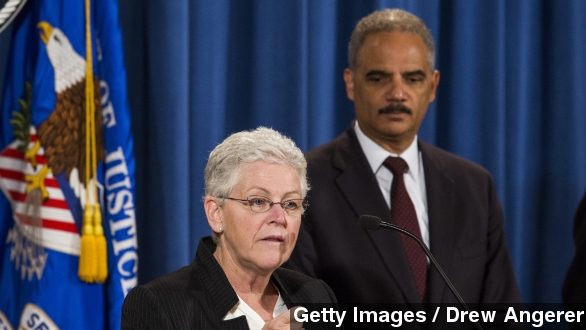 Automakers Hyundai and Kia have been hit with a $100 million fine for inaccurately calculating the fuel efficiency of their cars.

The fine stems from a two-year investigation into how Hyundai and Kia tested their cars to ensure they met the EPA's emission standards. The government accused the two companies of cherrypicking data and manipulating road tests to inflate the fuel efficiency ratings of 1.2 million vehicles. (Video via YouTube / Nik Miles, Consumer Reports)

The disputed numbers allowed Hyundai to claim its cars got 40 miles per gallon, and led dealers to show bogus efficiency information to consumers — which, according to the government and the competition, unfairly weighted the market in their favor.

The out-of-court settlement breaks down like this: the two companies will pay the U.S. government a $100 million fine, the largest ever under the Clean Air Act. Additionally, both companies will forfeit 4.75 million greenhouse gas emission credits earned during the suspicious tests — a value of about $200 million. Finally, the companies must budget $50 million for independent audits of future vehicle tests.

And Jalopnik points out, that's all in addition to the $395 million the automakers have set aside to deal with lawsuits over the issue — bringing the total price tag up to about $745 million. "In short, don't mess with the EPA and American consumers. It can cost you a lot of money."

It's worth noting neither company has admitted fault in this settlement — both companies blame vague EPA testing procedures for the inaccurate labels.

MCCARTHY VIA C-SPAN: "When we hold them accountable, we actually make good on our promise to consumers that they know what they're buying and they're going to get the emission reductions and the clean vehicles that they're intending to purchase."

The settlement could also set a pricey precedent for other automakers who've run afoul of the EPA rules in the past, such as Ford and Mercedes-Benz.