The EPA May Have Spent Millions On Scott Pruitt's Security Detail 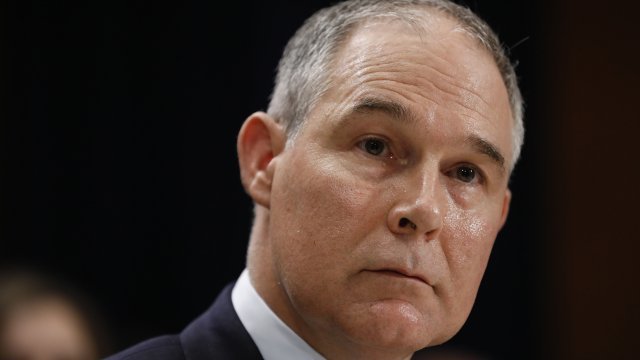 His security detail reportedly got so much overtime that many employees reached their yearly salary caps.

A report from The Associated Press says Pruitt had a full-time security detail and that his employees blew through their overtime so quickly that many hit annual salary caps of about $160,000. Some EPA agents were reportedly taken out of the field in order to provide security.

The new report adds to a growing list of ethics scandals faced by Pruitt during his tenure as head of the EPA.

Those staffers raised questions about Pruitt's excessive spending, which has drawn multiple investigations.

In August, the EPA's inspector general began investigating a number of expensive, taxpayer-funded trips Pruitt took. That investigation expanded earlier this year, and in March it was revealed Pruitt and his daughter rented a D.C. apartment from the family of an energy lobbyist.

Pressure has been mounting for President Donald Trump to do something about Pruitt. White House Chief of Staff John Kelly reportedly told Trump last week to let Pruitt go. And 64 House Democrats are calling for Trump to fire the EPA chief.

But the president has said he still has confidence in Pruitt — though White House press secretary Sarah Sanders told reporters "the president is not" OK with the most recent reported ethics violations.