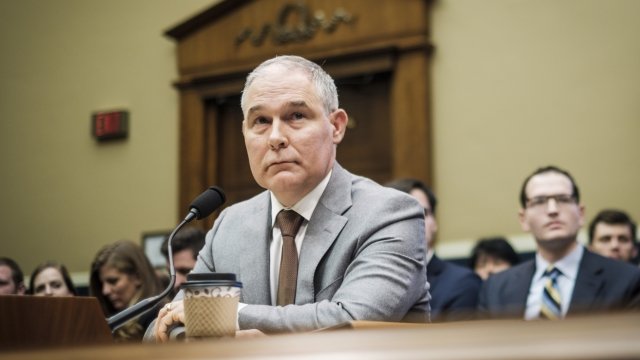 A letter addressed to Pruitt and signed by five lawmakers details the new allegations.

Scott Pruitt, the head of the U.S. Environmental Protection Agency, is facing even more allegations of ethics violations.

The new allegations were outlined in a letter addressed to Pruitt and signed by five lawmakers. The six-page letter states that the lawmakers talked with former EPA Deputy Chief of Staff for Operations Kevin Chmielewski.

According to the letter, Chmielewski "provided new details and corroborated other reports regarding allegations of wasteful spending of taxpayer funds and [Pruitt's] disregard for the ethical and legal requirements of [his] position."

Pruitt reportedly stayed in expensive hotels while traveling that exceeded the government-allowable maximums. He flew with Delta instead of the government's contract carrier for that route so he could get frequent flier miles.

Chmielewski also said when he refused to approve Pruitt's "inappropriate and unethical spending," he was removed from his senior position and put on administrative leave.

The letter asked that Pruitt provide copies of all documents related to the alleged violations.

The EPA head was already in hot water amid claims of multiple ethics violations, including leasing a Washington, D.C., apartment from the family of an energy lobbyist for less than market value and spending taxpayer money on first-class and military travel.