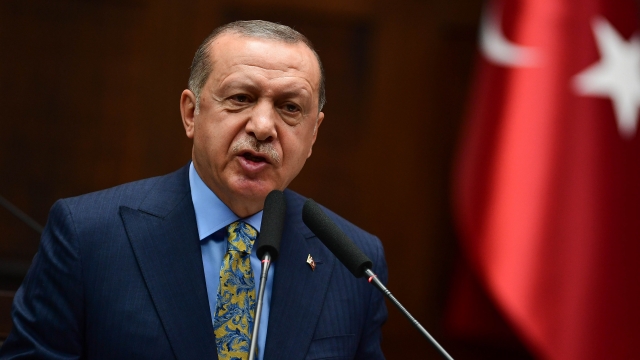 Turkish President Recep Tayyip Erdoğan had previously said he would only meet with President Donald Trump.

Turkey's president says he will meet with U.S. Vice President Mike Pence later this week to discuss a cease-fire.

Turkish President Recep Tayyip Erdoğan had previously refused to meet with Pence and the U.S. delegation, saying he would only meet with President Donald Trump. But by Wednesday Erdoğan seemed to have changed his mind. His communication director confirmed he will in fact meet with the U.S. vice president.

The meeting is set for Thursday. Pence said he will lead a delegation to "enact an immediate ceasefire & begin negotiations to restore peace and stability to the region."

Erdoğan's change of mind comes a day after he told reporters: "We will never declare a ceasefire. We do not sit at the table with terrorist organizations."

The U.S. imposed sanctions on the country Monday in an effort to pressure Turkey to end its attack on Kurds in northern Syria.