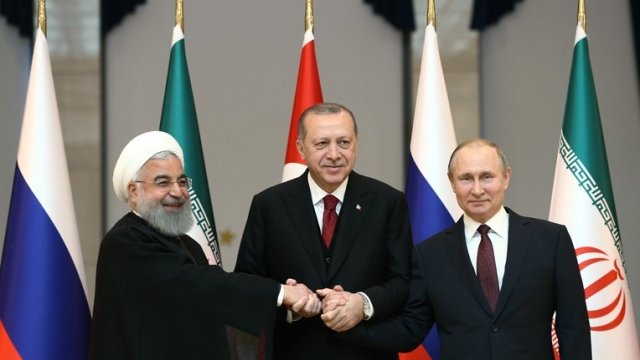 It's really not clear what the U.S. plans to do in Syria, but these three countries just met to talk about how to end the conflict.

Office of the Turkish President

As the Trump White House struggles to deliver a cohesive message on its plans in Syria, the leaders of Iran, Turkey and Russia met Wednesday to talk about how they can end the war in Syria.

Russian President Vladimir Putin, Turkish President Recep Tayyip Erdoğan and Iranian President Hassan Rouhani vowed to contribute to reconstruction and aid. Having their hand in that process could give those leaders significant influence over the region, but an analyst for CNN points out the conflict is probably not close to finished.

Two other rebel groups agreed to peace deals in March.

This was the second time that these three leaders have met to talk about the conflict. But now they're talking against the backdrop of a potential U.S. pullout. The U.S. leaving would open up a power vacuum in parts of Syria, and experts say that could embolden Russia and Iran, which have both backed Syrian President Bashar al-Assad.

A senior Trump administration official said Wednesday that the president reluctantly agreed to keep U.S. troops in Syria on Tuesday while meeting with his national security team. But that official also said the president wants his team to get the U.S. out of the country as soon as possible.