Erdogan Sworn In As Turkey's President With Sweeping New Powers 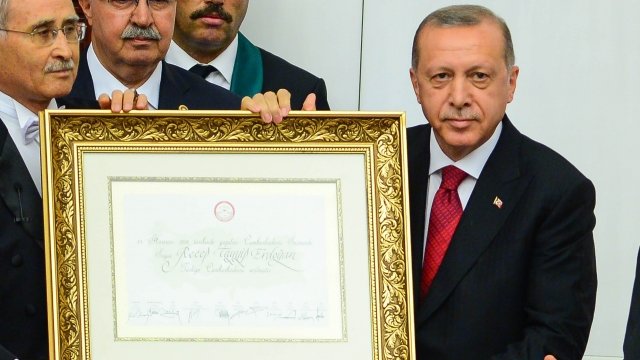 Erdogan was re-elected as president late last month. He's held the position for more than 15 years. But this term will be markedly different.

Recep Tayyip Erdogan was sworn in as Turkey's first executive president Monday, giving him some sweeping new powers that critics argue could lead to trouble.

Erdogan was re-elected as president late last month. He's held the position for more than 15 years and is the country's longest-serving leader since the Republic of Turkey was founded in 1923.

But this term will be markedly different. Erdogan will be the first president under a new system voters chose by a slim margin last year. The new model does away with the prime minister and vests more powers in the president.

Erdogan has said an executive presidency would help improve Turkey's economy and security. But his opponents worry the changes could lead to authoritarianism, with the new presidency having fewer checks by other branches of government.