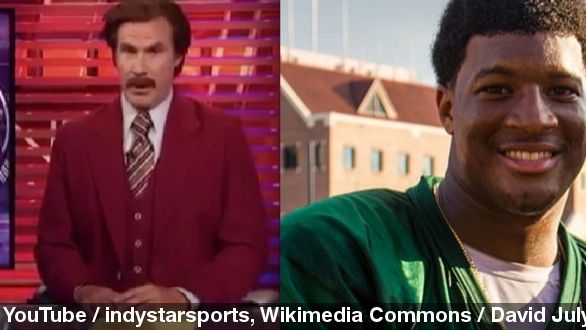 ESPN announced the Ron Burgundy-hosted episode of &quot;SportsCenter&quot; has been canceled in light of any news on the Jameis Winston sexual assault case.

Looks like all those waiting anxiously to see Will Ferrell's Ron Burgundy on "SportsCenter" will have to wait to see him somewhere else.

Just one day before Ferrell was scheduled to host the show as the hilarious "Anchorman 2" character, ESPN announced the episode had been cut from Thursday night's lineup. (Via ESPN)

ESPN's Director of Communications David Scott went into a little more detail, saying, "Ron Burgundy's scheduled Thurs. appearance has been canceled in light of the potential implications of any news from the State Attorney's press conference in Fla." (Via Twitter / @ESPNprDScott)

Scott also admitted, as of right now, there isn't a reschedule date for the Ron Burgundy-hosted episode.

The prosecutor overseeing the investigation said they "think they have exhausted all investigative tools" and will announce if Winston will be charged. (Via Tallahassee Democrat)

Tallahassee police say they received a sexual assault complaint from an unidentified woman against Winston in December of last year. (Via News 12 Long Island)

She reportedly didn't know the identity of her attacker until January, when she identified him as Winston.

According to police, evidence obtained from a sexual assault kit taken on the day of the alleged attack showed semen found in the woman's underwear matched Winston's DNA collected by police last month. (Via Sports Illustrated)

But that doesn't necessarily mean the star quarterback assaulted the woman. It only proves that Winston had close contact with the accuser the night the attack allegedly happened. (Via YouTube / Florida State  Seminoles)

If Winston is charged with a felony, Florida State University's code of conduct requires the school to suspend Winston from the team immediately.

Which could spell bad news for the Seminoles. Winston was recently named the ACC Player of the Year and has led FSU to the No. 1 ranking. The team will play for a conference title Saturday. (Via CBS)

ESPN's decision to give the spotlight to the Winston press conference have some Ron Burgundy fans pretty upset. (Via Twitter / @hobb_on_my_knob)

But some are praising ESPN's decision to make room for the potential breaking news this press conference could bring.

A writer for Awful Announcing says, "Although it does leave some egg on the faces of everyone involved, this is the smart, journalistically sound move and ESPN should be applauded for showing discretion in this case."