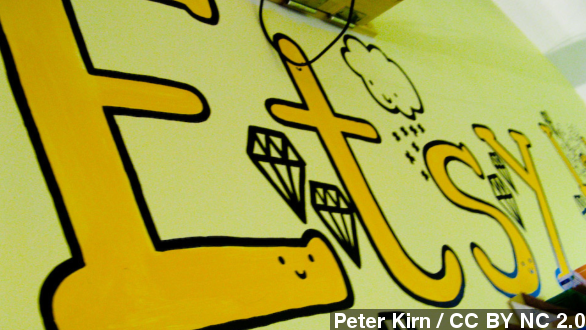 Etsy is filing for an IPO on the Nasdaq stock exchange.

The eclectic online marketplace is looking to raise $100 million as it goes public, but analysts expect it will pull in much more than that. Some reports indicate the IPO could spike the company's valuation to around $2 billion. (Video via Etsy)

Etsy says its marketplace hosts 1.4 million sellers, together offering everything from vintage furniture to cat-shaped cat beds to computer decals.

Revenues have climbed steadily for the past three years, but the company has also recorded net losses each year in the same timeframe.

Seeking more money brings its own criticisms. Until 2013, anything listed on Etsy's marketplace had to be handmade.

Lifting this restriction brought in more money for Etsy, at the expense of what Wired describes as its "soul."

For what it’s worth, CEO Chad Dickerson wrote a letter in the SEC filing saying: “I intend to keep our unconventional operating philosophy as we become a public company.”

Soul or no soul, he will have his work cut out for him. Fortune notes Etsy is a B Corporation, meaning it’s made a commitment to certain social and environmental sustainability standards.

“So it technically has a ‘double bottom line,’ which means it must make investors happy while also following more unconventional corporate guidelines that emphasize doing good.”

SEC paperwork could be out of the way in as soon as three weeks, at which point Etsy will start trading under the the symbol ETSY.