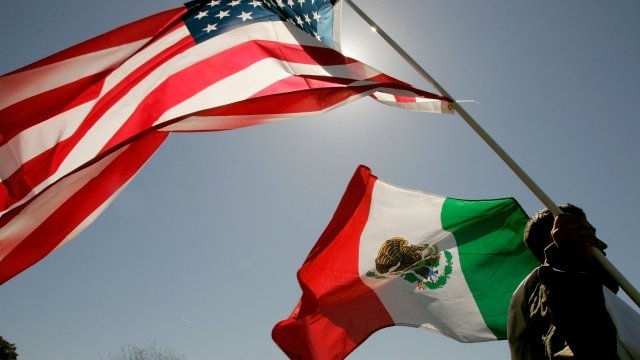 Mexico slapped back with its own set of tariffs on flat steel, sausages, various cheeses and more.

The Trump administration confirmed Thursday that it will impose tariffs on steel and aluminum imports from Canada, Mexico and the European Union. And it didn't take long for Mexico and the EU to respond — they weren't happy.

The EU called it "protectionism, pure and simple," saying it tried to avoid this outcome. The EU also said it would "trigger a dispute settlement case at the [World Trade Organization], since these US measures clearly go against agreed international rules."

And Mexico slapped back with its own set of tariffs on flat steel, pork legs and shoulders, sausages, apples, grapes and various cheeses. The country said those would be in place until the U.S. government gets rid of its tariffs.

Canadian Prime Minister Justin Trudeau plans to respond to the tariffs in a press conference Thursday.

The Trump administration is hoping the tariffs will boost U.S. steel and aluminum industries, but some analysts are worried it'll start a trade war. And that's on top of similar trade tensions with China.