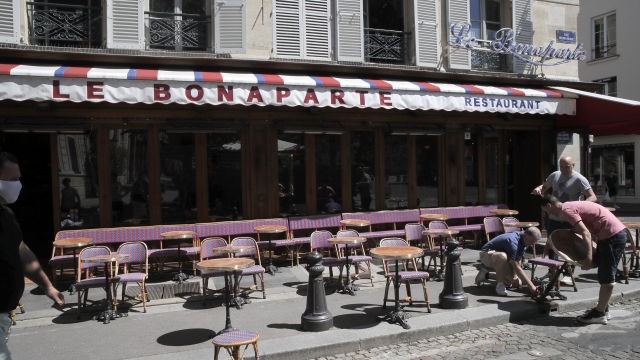 The Eurozone suffered its largest economic crash in history during the three-month period ending June 30.

As Europe emerged from the cruelest of winters amid a deadly pandemic, its people were eager to get back to the piazzas of Rome and the sandy beaches of the Spanish Riviera.

But what isn't back is the European economy. By the end of June, the Eurozone GDP fell by more than 12% in its largest three-month plunge in history.

That's according to new economic data released Friday. Hopes for a resurgence are dimming as spikes in COVID-19 cases are being reported in Spain and France.

Spain, an early ground zero for the pandemic, saw its economic activity shrink by 18.5%. It was hoping summer tourism would spark a revival.

But now European travel companies are canceling tours to the country, and the U.K.'s health secretary has ordered a 14-day quarantine for people arriving from Spain.

"There is a serious concern about a second wave that's clearly now moving across Europe. And we need to take action ... to protect this country and protect everybody in it."

Hoping to reassure travelers, Spain's tourism secretary has insisted the country is handling the virus. He said outbreaks are confined to limited tourist zones frequented by young people.

"First, it is important that our neighboring countries, as well as other markets that work with us on our tourist scene, they need to realize that Spain right now is not in a second wave."

France, which has the Eurozone's second-largest economy, had a nearly 14% economic decline in the three months ending in June. Its new COVID-19 cases have jumped by more than 50% in a week.

He said the French people are sitting on as much as 100 billion euros in total savings. But he says: "They see the crisis. They see what's going on worldwide. They are concerned the pandemic will come back."