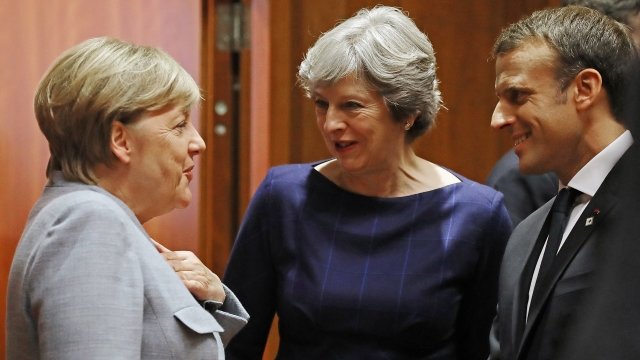 Three European leaders called on Iran to "show restraint" and "continue to meet its own obligations under the deal."

After President Donald Trump took the U.S. out of the 2015 nuclear deal, European leaders are asking Iran keep its end of the bargain.

In a joint statement, U.K. Prime Minister Theresa May, German Chancellor Angela Merkel and French President Emmanuel Macron said they were committed to the pact. They pledged to defend the "economic benefits" the agreement brought to Iran and urged the U.S. to "ensure that the structures" of the agreement "remain intact."

The three leaders also asked Iran to "show restraint" and "continue to meet its own obligations under the deal." That includes allowing for timely inspections of the country's nuclear program. That program, the three said, must "remain peaceful and civilian."

The "E3" admitted there were areas that needed attention. The nuclear deal expires in 2025, and the three said a long-term framework "will have to be defined." They also mentioned Iran's ballistic missile program and "destabilizing regional activities." All those factors were reasons Trump said he didn't support the deal.

On the flip side, conservatives in the U.S. and Israel praised Trump for his decision to leave the deal. Republicans, including House Speaker Paul Ryan and Sen. John Cornyn, applauded the move. Israeli Prime Minister Benjamin Netanyahu, one of the deal's harshest critics, called Trump's action a "historic move."