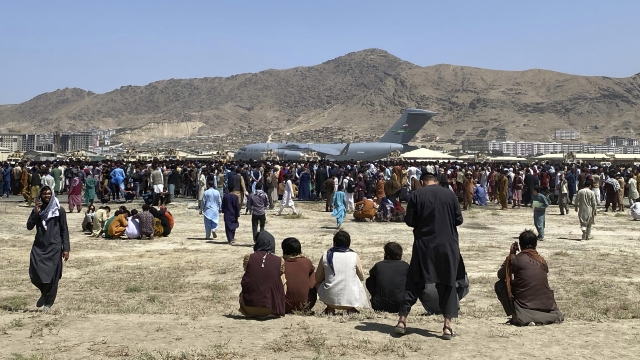 The U.S. has resumed flights from Kabul's internation airport after flights were halted because of crowds on the tarmac.

The U.S. military is coordinating with the Taliban while accelerating the airlift of Americans and Afghan allies from the Kabul airport, and also bringing in additional U.S. troops in a scramble to complete the evacuation in two weeks, Pentagon officials said Tuesday.

Overnight at the airport, nine Air Force C-17 transport planes arrived with equipment and about 1,000 troops, and seven C-17s took off with 700-800 civilian evacuees, including 165 Americans, Army Maj. Gen. William Taylor told a Pentagon news conference. The total included Afghans who have applied for Special Immigrant Visas and third-country nationals, he said.

On Monday the airlift had been temporarily suspended when Afghans desperate to escape the country breeched security and rushed onto the tarmac. Seven people died in several incidents.

The Taliban has promised a new era of leadership.

The chief Pentagon spokesman, John Kirby, said U.S. commanders at the airport are in direct communication with Taliban commanders outside the airport to avoid security incidents. He would not provide details but indicated this communication was in line with an arrangement made on Sunday by the head of U.S. Central Command, Gen. Frank McKenzie, when he met with Taliban leaders in Qatar and won agreement to “deconflict” forces and allow a safe U.S. evacuation.

Kirby said there have been no hostile actions by the Taliban, and that several hundred members of the now-defeated Afghan army are at the airport assisting in the evacuation.

He said U.S. forces plan to wrap up their oversight of the evacuation by Aug. 31, also the date President Joe Biden has set for officially ending the U.S. combat role in Afghanistan.

Kirby added that the U.S. was in charge of air traffic at the Kabul airport, where military and some commercial flights had resumed after they were suspended for a period of time on Monday amid a stampede onto runways by frightened Afghans.

The U.S. hopes to fly out up to 5,000 people a day once the full deployment of 6,000 U.S. troops arrive to secure the evacuation, and once more transport planes can land, he said.