Everything You Need To Know About Mobile Payments In 2015 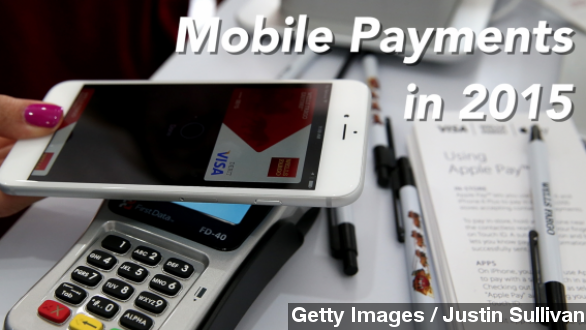 This year, mobile payments might finally catch on. Here are the things you need to know to stay on top of the latest developments.

After years of buzz, mobile payments might finally be ready to take off in 2015.

Tech companies have long pushed them as the next big thing but they haven't really seemed viable — until now.

Apple Pay appears to be the current market leader. The company has gathered an impressive list of partners that include banks, credit card companies and retailers.

You do need an iPhone 6 or iPhone 6 Plus to use Apple Pay because older phones don’t have the necessary near-field communication chip, or NFC chip, to make the technology work.

And a group of major retail chains, including Wal-Mart, are working on a competing service and playing hardball, blocking Apple Pay from their stores.

That system, CurrentC, is an effort from a whole host of companies to be a mobile payments system for consumers, while allowing companies to dodge fees from credit card companies.

But Apple Pay has something its competitors do not: a seal of approval from the federal government.

At a cybersecurity summit at Stanford University, Apple CEO Tim Cook revealed that Apple Pay will soon be an optional replacement for federal payment cards used for for things like Social Security and veterans benefits.

The next big one is Samsung Pay. Like Apple, only the newest Samsung devices use the system. The Galaxy S6 launches next month, and the payment system won't roll out until sometime this summer.

But even though Apple got there first, Samsung Pay will have a wider reach at launch.

"We believe that for any payments service to be successful, universal acceptance is critical," said Justin Denison, Samsung Vice President of Product Strategy and Marketing.

That’s because, in addition to an NFC chip, Samsung's service will use a system from LoopPay. It sends a signal that mimics the magnetic strip typically found on the back of credit cards.

So, to use Samsung Pay, retailers don’t need to upgrade to NFC-enabled payment terminals. The system should work at most places with a typical credit card reader.

Then there's Google Wallet. It launched in 2011 but never managed to really catch on. But thanks to a recent deal with Verizon, T-Mobile and AT&T, Google Wallet now comes pre-installed on most Android phones, which will likely give the service some much-needed exposure.

Also, Google bought intellectual property from Softcard, another mobile payments competitor, as part of its big deal. That move makes it seem like Softcard will eventually be folded into Wallet.

So there are three strong options for mobile payment systems: Apple Pay, Samsung Pay and Google Wallet. But tech companies still have to figure out how to get consumers to hop on board.

Apple's Tim Cook likes to brag that his company accounts for a lion’s share of mobile payments transactions.

"It's the first and only mobile payment system that is both easy, private and secure," said Cook.

But consumers haven’t exactly been flocking to the services.

It's likely hard to sell consumers on the security of mobile payments when cybersecurity breaches at major retailers routinely make headlines.

And the argument that mobile payments are more convenient than traditional systems might seem trivial. Swiping a credit or debit card isn't much different than pulling out a phone.

Regardless, the amount of high-profile mobile payment offerings makes it likely that tech companies will keep trying to popularize the services, whether customers want them or not.

This video contains images from Getty Images and music by Pierlo / CC BY 3.0.