Here's Everything You Need To Know About Pneumonia 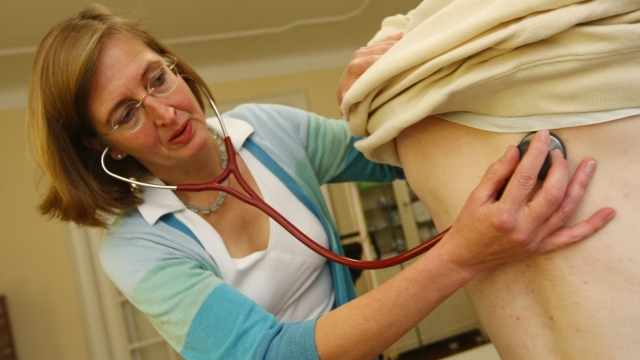 It's one of the most common illnesses in the U.S. But it can get pretty serious.

Pneumonia. It's one of the most common illnesses in the U.S.

The lung infection puts about 1 million adults in the hospital every year. And it can get pretty serious — about 50,000 die from it.

And anyone can contract it, even politicians.

Hillary Clinton's doctor confirmed Sunday that the Democratic presidential candidate is being treated for the disease. It's unclear how she got infected.

SEE MORE: How Much Do We Need To Know About The Presidential Candidates' Health?

But pneumonia can be caused by bacteria, a virus or fungi. When a person becomes infected, the lungs fill with fluid and make breathing difficult.

Anyone can get pneumonia, but older adults, children and people with chronic illnesses are more susceptible.

The most common symptoms are coughing, fever, shaking chills and shortness of breath.

Treatment depends on several factors, including the cause of the infection, how severe the symptoms are and the patient's age and overall health.

Most cases aren't that serious and can be treated at home with plenty of fluids, rest and aspirin to control any fever.

But some patients need to be hospitalized and given fluids through an IV, antibiotics, oxygen therapy and possibly breathing treatments.

And if left untreated, pneumonia can cause respiratory failure, sepsis and even death.

Pneumonia itself is not contagious, but the germs that cause it are. And they can spread from person to person pretty easily.

In Clinton's case, a source told People that several members of her campaign have also been sick in recent days.

Fortunately, protecting yourself from pneumonia is pretty simple.

Doctors recommend getting a flu shot every year, washing your hands, refraining from smoking and being aware of your general health.