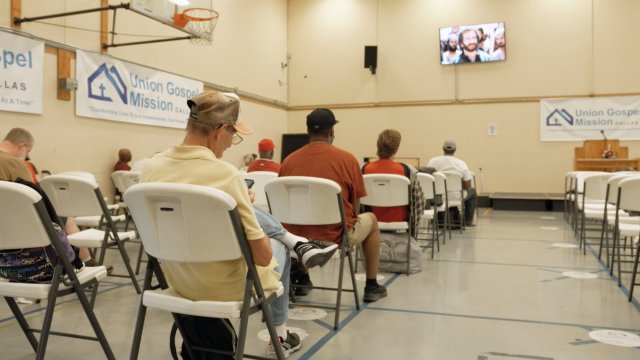 A rise in homelessness could also make it harder to stem threats of another surge in COVID-19 cases.

COVID-19 has exacerbated the homeless crisis across the country. And now, with the ending of one crucial pandemic-era protection, shelters are preparing for an influx.

“With that moratorium ending, that means there will be more people on the street," said Bruce Becker, CEO of Union Gospel Mission.

The Supreme Court recently banned the CDC’s eviction moratorium, which stopped landlords from evicting tenants. Some states, like New Jersey, are defying the court’s decision. But there are still an estimated 750,000 households at risk of eviction.

Labron Cornell was homeless for nearly two years. After having a stroke that disabled him from working, he lived in his car and then two shelters before he found stable housing.

“I’m able to pay my rent on time and just live like a normal human being again. It's a blessing," Cornell said.

He says the Union Gospel Mission shelter in Dallas, where he’s now working, saved his life. But he worries about other homeless people in the city meeting the same outcome he did.

“Unfortunately, we only have so many beds available, and right now they're pretty much all taken up," Cornell said.

The homeless population here in Texas has grown since the pandemic began, now over 27,000 people, including 6,000 in families with children. But it’s more than just an affordable housing problem; it’s also a public health hazard.

Another rise in cases is already overwhelming hospitals across the state. With more homeless people vulnerable to COVID-19, the surge could become harder to stem. It’s put shelters in a tight bind, and one that could push them back to the protocol from the early days of the pandemic.

“We could not go in person to minister face-to-face, and I could not hug them. That is what I missed a lot," said Susie Jennings, CEO of Operation Care International.

Susie Jennings, whose nonprofit works with shelters around the world, also worries about the fall in donations.

“I'm just urging people to help us because I cannot do it. We really need, desperately need help.”