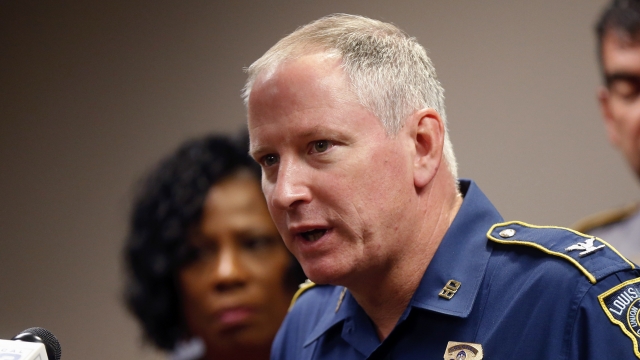 Excerpts from the personal journals of the police superintendent show what Col. Kevin Reeves was thinking in the early days after Greene's death.

An ongoing investigation into the death of Louisiana motorist Ronald Greene continues to uncover new information.

A journal entry from the former top cop of the Louisiana State Police, dated just 12 days after Greene's death, says:

“Realize there is a problem — must address immediately.”

But well over a year went by — 462 days — before Col. Kevin Reeves opened an internal investigation into the actions of the troopers involved,  including one who was recorded boasting he "beat the ever-living f—- out of" Greene.

Now Reeves is one of many under investigation for allegedly covering up Greene’s death.

Eleven pages from Reeves' three journals were released Thursday in response to a subpoena from a legislative committee looking into a possible cover-up of the case.

The panel's chairman says the troubling questions raised by those few pages were enough to demand that Reeves comply by turning over all his journals, with a threat of contempt charges if he doesn't.

"The documents themselves show that Col. Reeves knew early on that there was an issue and considered possible measures to address it but ultimately didn’t,” Republican state Rep. Tanner Magee said. “This committee has sought to figure out why."

While the handwritten pages are in places difficult to decipher, the page of notes dated 12 days after Greene's death are a clear to-do list of possible actions in response to the case: suspending officers or putting them on administrative leave, opening up an internal probe and conducting a video audit of Master Trooper Chris Hollingsworth, who boasted of beating Greene and had a history of turning off his body-camera video.

During questioning from Louisiana lawmakers in March, Reeves said he was not a part of any cover up and he was not intimately involved in the investigation.

"I’m not completely in the dark on the cases, but the specifics of what’s going on in these cases I was not involved in," Reeves said. "I’m not directing, I don’t want daily updates. I want someone to conduct an investigation in an unfettered manner that represents what happened."

But testimony from other officers within the department calls that claim into question, with Lt. Scott Brown saying someone asked him to conceal evidence in the case and after he shared that to Col. Reeves, "Nobody in my chain of command wanted anything done.”

Ronald Greene was killed in May 2019 when he engaged police in a high-speed car chase and ultimately crashed his vehicle.

After the crash, the Black motorist was beaten, stunned and dragged during a struggle with white Louisiana troopers. Officers originally told Greene’s family he was killed by the car crash.

An autopsy later revealed his fatal injuries were not the result of the car crash.  Authorities refused to release video of the incident, though the Associated Press obtained copies showing Greene pleading with officers while being struck.

Greene’s death has opened up multiple investigations on the state and federal level.

Along with a federal civil rights investigation, Louisiana lawmakers are investigating allegations of a cover up Gov. Edwards.

Up to this point, no one has been criminally charged in Greene’s death.

The local district attorney, John Belton, says he plans to convene a grand jury to bring criminal charges in this case.