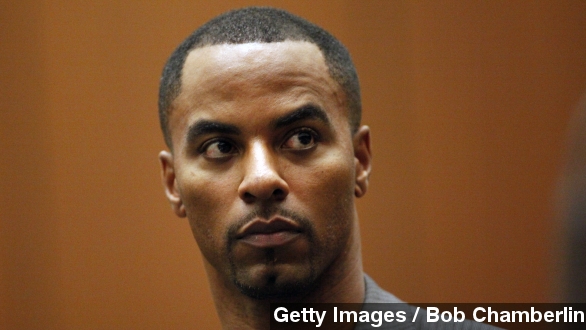 Two charges stem from an alleged incident that happened September 2013. The third charge, which was tacked on during the proceedings, stems from another incident that reportedly happened only one month prior. (Video via WGNO)

Sharper has now been indicted in three different states, all for rape allegations — the other two being California and Arizona. But a WWL-TV reporter suggests the charges in Louisiana could carry a heavier penalty if he's found guilty.

"The penalty for aggravated rape, which he has two charges, is mandatory life in prison. ... Secondly, he now has two co-defendants. ... One or both of those defendants could cut deals to testify against Darren Sharper," reporter Mike Perlstein said.

Thirty-nine-year-old Sharper is currently in a California jail and has been there since February. He's accused of drugging and raping two women in Los Angeles County, and, according to The Times-Picayune, he could face up to 30 years in prison.

It's uncertain where Sharper will go next, seeing that he has cases open in three different states. WWL-TV reports prosecutors in all three states have been in contact but he could stay in California — for now.