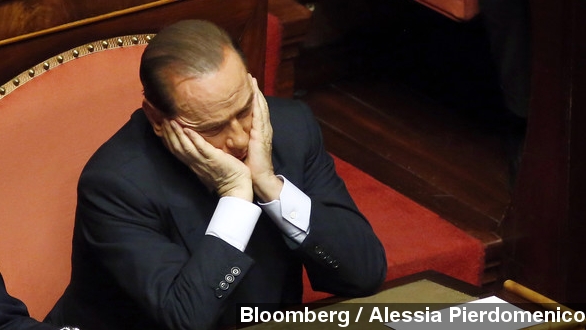 "They've just watched him get flung out of parliament in the most humiliating circumstances, effectively told as a convicted felon, he no longer has a place in public life, can't compete in elections anymore." (Via BBC)

CNN reports a law passed last year prohibits anyone convicted of serious criminal offenses from participating in Parliament, which could all but end the 77-year-old Berlusconi's two decade-long political career.

In August, Berlusconi was sentenced to four years in prison — which was later commuted to a year of community service. (Via Euronews)

The Times reports Berlusconi transformed the day into "a televised, split screen standoff: on one screen was the former prime minister, declaring himself a victim of persecution ... on the other, the Italian senate ... who finished their speeches and lowered the boom."

At one point, Berlusconi said to his supporters, "It's a bitter day of mourning for our democracy" while also pledging to remain a political force. (Via The Wall Street Journal)

With Berlusconi out of the picture, Bloomberg reports current Prime Minister Enrico Letta could have a freer hand to shape policy.

Despite his expulsion from parliament, The Guardian suggests Berlusconi probably won't disappear entirely. The paper predicts he'll become a figure similar to Beppe Grillo, the MS5 leader who has never been elected.

Berlusconi is expected to begin community service for his tax fraud conviction sometime next year, but his legal problems are far from over. He's been ordered to stand trial for bribing a senator and is appealing a June conviction for having sex with an underage girl.