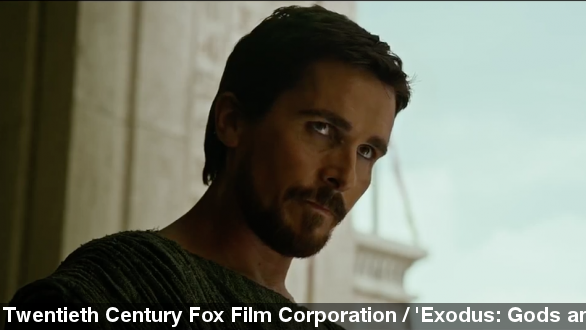 The Ridley Scott-directed epic stars Christian Bale as Moses and follows the biblical story of the Jews' escape from Egypt. But Egyptian officials have called the film offensive, saying it gives a "Zionist view" on history.

Among the issues raised: an apparent claim that the Jews built the pyramids and the idea that an earthquake caused the Red Sea to part, not a divine miracle.

This ban wasn't a complete surprise to many in Hollywood.

"And the reason that movie was banned was because it depicted a prophet and in Islam, it is forbidden to show a prophet. So we expected this movie to be banned as well because it showed Moses who was another prominent prophet."

Moroccan theaters have also been strongly advised not to show "Exodus". According to The Guardian its distributor said Saturday the film "contained a scene that represents God in the form of a 'child who gives a revelation to the prophet Moses' ... which is forbidden under Islam."

The film faced plenty of criticism even before its U.S. release earlier this month.

There were calls for boycotts because of the decision to cast mostly white actors in a film set in Egypt.

Bale managed to upset both Jews and Christians by calling Moses "schizophrenic was and one of the most barbaric individuals that I have ever read about in my life."

And then there's the fact it really just might not be very good. Reviews have been mixed to say the least — it has just a 29 percent rating on Rotten Tomatoes.

According to Box Office Mojo it has so far grossed $109 million worldwide, but cost a hefty $140 million to make.