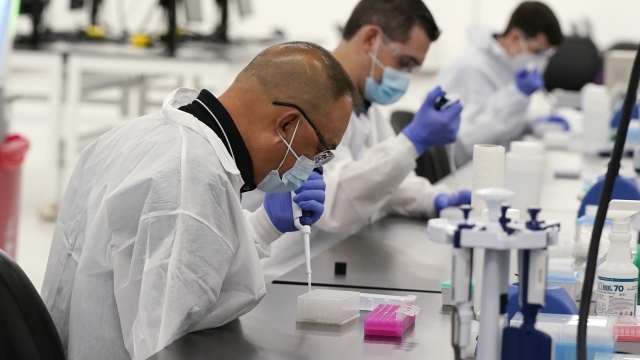 The CDC says nationally, the combined proportion of cases that are Delta is predicted to increase to 93 percent.

As the coronavirus jumps host to host, it finds ways to mutate.

In labs across the country, experts are trying to catch the changes, and keep a pulse on what could be the next threatening variant in the pandemic.

The variants can create a moving target and change the game, says Dr. Wesley Long.

Dr. Long is the medical director of diagnostic microbiology at Houston Methodist, where they started sequencing samples early on in the pandemic. He said they're mostly seeing the Delta variant now.

"That really changed, I think, the entire global complexion of the pandemic from where we sort of thought we had it on the ropes to kind of being like, the bell rings and now we're in a new round," said Dr. Long.

In this round against the pandemic, the CDC lists Alpha, Beta and Gamma 'variants of concern' in addition to Delta. The agency says nationally, the combined proportion of cases that are Delta is predicted to increase to 93 percent.

"Some of those mutations may give the virus some competitive advantage. What we've typically seen with the Delta variant, with the UK variant before it, with the d614 gene mutation back at the very beginning of the pandemic these are all mutations that have tended towards making the virus more transmissible or more contagious," said Dr. Long.

"They stick more tightly to the cells of our respiratory tract. And that's why they're more easily transmitted and when that happens that's why we're seeing what we’re seeing with Delta. What we also want to watch is changes also affect the ability of the vaccine protection, protect us from disease particularly from serious disease and hospitalization," said Dr. Bob Bollinger, a professor of infectious diseases at the Johns Hopkins University School of Medicine. "So far we haven't seen that but we'll have to watch that carefully."

When it comes to variants of interest, the World Health Organization includes 'Lambda' as one, which the CDC does not. The CDC said it's been identified in 44 states, but as of early August made up just 0.17 percent of sequenced samples. Dr. Long said they identified one sample in July.

"I'm not really worried about Lambda because I think it’s going to be a South American story for Chile, Ecuador and Peru," said Dr. Long

The variant was first sequenced in Peru. The World Health Organization reported it made up 81 percent of cases last spring there, though that number has since dropped, and spread in Chile.

"What we've seen so far makes it appear that Gamma and Lambda have about the same degree of contagiousness so they're kind of seeing which one is going to beat out the other one," said Miguel Allende, Ph.D., a professor at the University of Chile who directs a genomics center.

Allende said it doesn't appear to have the punch needed to become the worst of the variants.

"What we've seen because of its behavior to other variants of concern I would say it doesn't have the best chance to be the dominate variant. I would say Delta and also Gamma," said Allende.

In a fight against variants, doctors still point to vaccinations as the best defense.

"We are fortunate thus far the three major vaccines we have out there in the U.S. provide us with overwhelming protection from severe illness as well as death," said Dr. Chirag Patel, the assistant chief medical officer at UF Health Jacksonville, said.

"Reaching herd immunity is more important than we have stressed before because of the fact we are seeing variants. People have to understand had we had enough people vaccinated earlier in the course of this pandemic we may not have had Lambda, or Gamma or Delta. When you give the virus the ability to mutate and jump host to host you are asking it to come up with something dangerous," said Dr. Patel.

That's something experts plan to keep monitoring, as they race to get more shots in arms.

"I think the next if there is another variant to out-compete Delta I think it's gonna be built, it’s gonna stand on the shoulders of Delta; a Delta-derived variant would be my prediction," said Dr. Long.