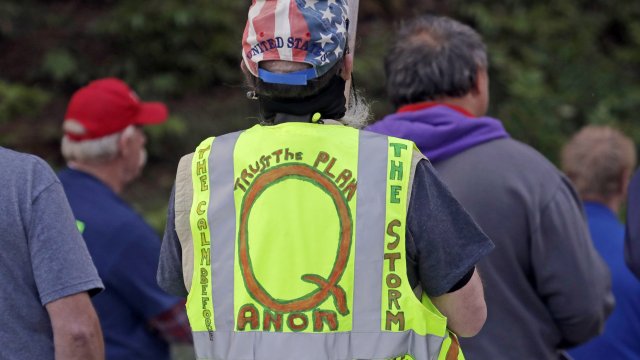 Experts believe QAnon conspiracy community may form around personalities other than former President Trump but have similar themes.

Many QAnon followers lost faith in the baseless conspiracy theory when former President Donald Trump, a central figure in the QAnon world, left the White House. But not everybody.

According to the QAnon prophecy, the inauguration was supposed to be the day that Trump would arrest Democrats and celebrities for running a global child sex trafficking ring — and remain in office for a second term.

On top of that, Q, the person or persons behind the QAnon theories, has largely gone silent since election day. Whoever Q is has only posted four times since the election, the last time in December.

"I am convinced that this movement will continue for some time to come, forming around other personalities but having similar themes — being anti-democratic, being authoritarian, thinking that violence is acceptable," said Sophie Bjork-James, Assistant Professor of Anthropology at Vanderbilt University.

"QAnon's not just a conspiracy theory, and it's not just that people believe in it. It's a community. The community has well-developed lines of communication. There's identified leaders. There are people that can be looked to to provide some guidance," said Kathleen Stansberry, Assistant Professor of Strategic Communication at Elon University.

"QAnon is really invested in this thing called the plan, and they have to trust the plan. And that's a faith-based moment. Prophecies can can be given. They can also fail. And so the failure of the prophecy doesn't mean the failure of the entire movement. It means regather and figure out the next thing so the goalposts keep shifting," said Jack Bratich, Associate Professor of Journalism and Media Studies at Rutgers University, and author of “Conspiracy Panics: Political Rationality and Popular Culture.

It’s difficult to predict exactly what might happen to the QAnon theory, but there are a few possible pathways for followers.

Some QAnon followers have moved to harder-to-find social platforms like Telegram and Gab to keep the movement alive. And there, they might start following groups with similar extremist ideologies.

"White nationalists are on those platforms. National socialists are on those platforms and they are working as hard as they can to spread their message. And unfortunately, their message is very much in line with QAnon's message. It's against the government and they want a civil war. They want violence to be acceptable. They want to live in a conspiratorial reality as opposed to a fact-based reality," said Bjork-James.

For instance, one of the latest QAnon claims borrows from the sovereign citizen movement, a group viewed by law enforcement as a top domestic terrorist threat.

Sovereign citizens believe that an act by Congress in 1871 did away with the U.S. government, and installed a corporation in its place. QAnon groups on Gab and Telegram have been sharing documents explaining the act, saying it proves that Trump will be sworn in on March 4 — the original start date of new U.S. President, until it was changed in 1933.

"For some, he is going to be the president of the proper American republic, whereas Joe Biden is the president of so me fake America. Right. So they created this world in which Trump is still a leader," said Bratich.

Experts think that QAnon is likely to keep mutating, in part because followers still have access to online meeting grounds, and because of the alternate and ever-changing reality that QAnon presents to its followers.

"Taking QAnon off a platform does not put out the QAnon fire off a mainstream platform like Facebook or Twitter, but it does reduce access to fuel. So maybe a fire won't turn into a massive blaze," said Stansberry.

"There’s these common themes that conspiracy theorists seek to kind of renew as new events occur. And at the same time, there are disparate domains that kind of reinforce already existing notions. It's like QAnon is tied to at any moment five or six different conspiracy theories," said Pavan Holur,  a graduate student with UCLA's Narrative Modeling Group.