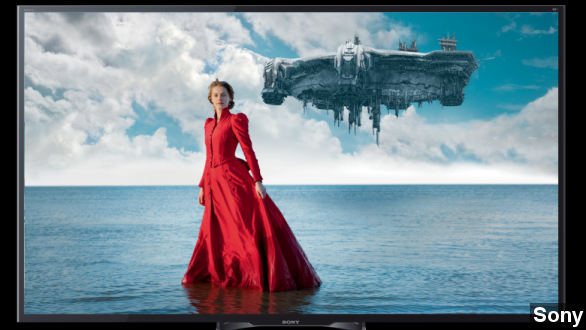 New 4K TVs are supposedly the next big thing; but does more pixels really mean a better picture?

If you give a human an HD screen, they're just going to want it more HD. But experts are saying we may have gone too far.

A new report from NBC says you're paying for more than you're seeing; that there are now so many pixels on some of today's screens, the human eye can't even process how sharp the images are. (Via Unbox Therapy)

Well, maybe Superman should get a 4K TV. Those TVs have about four times as many pixels as regular HD TVs. But a professor of ophthalmology tells NBC the human eye has limits, and those pixels just won't be perceived.

Still, you might remember this LG commercial that went viral earlier this year touting 4K technology. It made people not only believe a TV screen was a window, but that they were seeing an explosion. (Via LG)

So, yes, it does look pretty real.

But CNET reported in November that after "extensive testing," "Despite all the extra pixels I knew made up the 4K TV's screen, most of the time I didn't see any difference at all."

Also, Digital Trends ran a piece earlier this year called "How Many Pixels Are Too Many?" and pointed out the issue of eye strain.

There's not really a lot of 4K content out there yet for people to watch on those TVs, and they're expensive — sometimes running tens of thousands of dollars.

Though some are available in just the low thousands — Sony sells a 4K for $3,500.

Likely, 4K TVs will get less expensive, so you won't always be paying a ton extra for all those extra pixels. But it seems when it comes to pixels, less is just about the same as more.