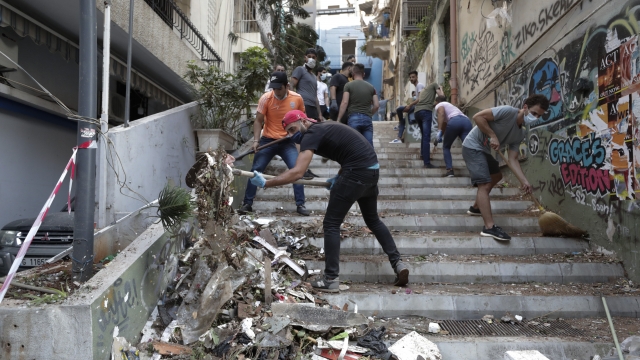 Security officials say the explosion was an accident of "severe negligence" after President Trump called it "an attack."

The day after that shocking explosion in Beirut — a desperate search for survivors — and answers.

Security officials say Tuesday’s explosion in Lebanon’s capital, which killed at least 100 people, was likely an accident due to "severe negligence:" An estimated 2,750 metric tons of ammonium nitrate had been stored in a port warehouse for years — and no efforts were taken to remove the stash.

"I don't know that it's fair to characterize it as negligence or even incompetence," Jimmie Oxley, a chemistry professor at the University of Rhode Island, said. "But it was a series of fatal mistakes."

What led the ammonium nitrate, which isn't considered combustible, to detonate remains unclear and under investigation. Chemists are calling it a chain of errors.

President Donald Trump told reporters, hours after the blast, it appeared to be an attack.

A reporter asked: "Are you confident that this was an attack and not an accident?"

"Well, it would seem like it based on the explosion," President Trump said. "I met with some of our great generals and they just seemed to feel that it was, this was not a some kind of a manufacturing explosion type of event."

Kirsten Fontenrose, who served in the Trump administration as senior director for the Gulf at the National Security Council, tells Newsy why the president may have highlighted an attack.

"He very likely reflected what he thought was the most plausible explanation from a list of possible explanations he was given by advisers," Fontenrose said. "They would have told him anything that they thought might be potentially true."

Ammonium nitrate is mainly used in fertilizer and as a commercial blasting agent in mines. The chemical is also used in cold packs and gas at hospitals — and, occasionally, in terrorist attacks.

"It looks as if there are two events and there are rumors that could have been welders starting a fire, could have been a fireworks explosion — almost looks like there's two explosions going on," Oxley said. "The first event and then that set off the ammonium nitrate."

Concerns have arisen that Hezbollah was involved in the explosion — and it has turned to explosives in the past — but analysts say arson isn’t a common tactic. Especially because the Iranian-backed militia, now also a political party, has something to lose.

"Hezbollah is actually part of the Lebanese government and this incident will actually reflect very negatively on the government of Lebanon and its position with the people," Stratfor Chief Military Analyst Sim Tack said.

"I can see them retaining the material for potential future use in attacks elsewhere, but causing this much loss of life and property to the Lebanese people does not help them strategically," Fontenrose said.

On the ground in Beirut, locals told Newsy they want answers.

A possibility many fear: the explosion could destabilize Lebanon.