Explaining How The Electoral College Works 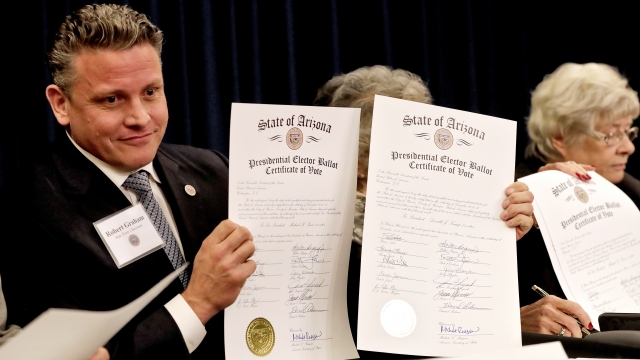 The Electoral College is responsible for formally voting for the next president. Their ballots will be cast Dec. 14, and then certified by Congress.

Weeks after Election Day, attention turns to the Electoral College and its members who are responsible for formally electing the next president.

"When we go to vote for president in November, we are not actually voting for president. You are casting your ballot for the electors of that person," said Gayle Alberda, an assistant professor of politics at Fairfield University.

"It used to be a little clear on our ballots where it said, you're voting for the electors of, you know, Joe Biden or the electors of Donald Trump. Our ballots don't say that anymore," said Matthew Weil, the director of the Elections Project for the Bipartisan Policy Center.

The Founding Fathers debated how the country's presidents should be picked — either by Congress or by a national popular vote. The Electoral College was created as a compromise between the two.

"It was supposed to be a time where the electors got together and really made sure and debated and discussed the winner of that election to make sure that indeed that was the person that would be right for the nation," said Alberda.

The Electoral College physically casting their ballots is more of a formality today, but the Constitution still determines how the process works.

The number of votes each state gets is based on the number of representatives they have in Congress. Washington D.C., also gets three electoral vote. With 538 votes available, that makes 270 the magic number.

Federal law does not dictate how states award their electoral votes. Forty-eight states and Washington D.C. have a winner-take-all system. Nebraska and Maine are the two exceptions, though it's rare for either to split its vote total.

The state electors meet on the first Monday after the second Wednesday in December to cast their votes. This year, that's December 14.

"In most states, there are two sets of electors — one for the Democratic candidate, one for the Republican candidate. And which slate of electors has to show up at the state capitol is determined by the announcement of who won the popular vote in that state," said Steven Smith, a professor of political science at Washington University in St. Louis.

Because electors are usually loyal to the political party they're representing, it's rare for one of them to vote for someone other than the designated party nominee.

"A faithless elector is that stray soul who decides that even though they were chosen to vote for this candidate or that candidate, they're going to choose someone else. Maybe another person or maybe some hero or whatever. They're making a political statement," said Michael Waldman, president of the Brennan Center for Justice at NYU Law School.

We've seen "faithless electors" in a handful previous Electoral College votes, but those votes have never impacted the final outcome of the presidential race.

Once the Electoral College ballots are cast, those votes are sent to Washington D.C. The final step will happen when Congress formally counts and accepts those ballots on Jan. 6, 2021.