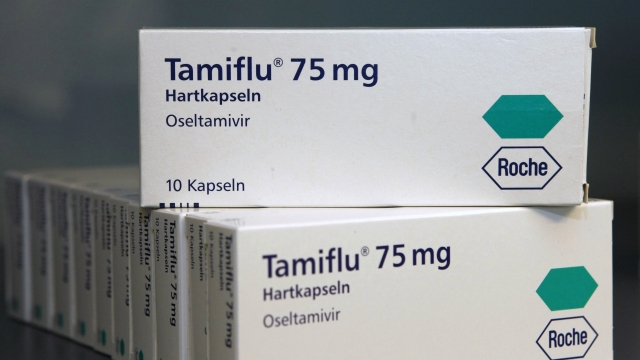 This winter’s flu outlook is grim. Medical experts have warned of a so-called "triple-demic" – with COVID, flu and RSV cases exploding all at once. Also surging, the number of people desperately trying to get needed medicine.

In Chino Valley, Arizona, Lexis Maclean panicked when she couldn’t find a prescription for her three-month- old son. He spent four days in the hospital on oxygen while recovering from RSV.

"Before you know it, you've literally spent your entire day just simply trying to get medication for your sick child," Maclean said.

She was lucky to eventually find the meds he needed. But Dr. Janice Johnston says Maclean’s problem is echoed around the country as viral illnesses spread.

"Suppliers weren't quite ready for that demand," Johnston said.

Demand skyrocketed doctors say because common winter illnesses are hitting earlier in the season than usual. There’s also simply more cases after two years of slowdown from millions masked and separated because of the pandemic.

CDC tracking shows more than half of the U.S. is threatened by "high" or "very high" respiratory virus activity as of early December. Some doctors worry about the flu anti-viral treatment — Tamiflu. Supply is already dwindling. And parents are noticing a lower supply of over-the-counter drugs.

"I couldn't even find Mucinex the other day," Maclean said.

In parts of the country headlines show RSV is sending hundreds of children to the hospital every day. That’s usually treated with fluids and Tylenol or oxygen if it's severe enough. Patients can also get secondary bacterial infections like certain pneumonias, for example, that antibiotics like Amoxicillin can help treat. But those liquid and powdered forms are also in short supply. The reason is somewhat unclear and pediatricians are alarmed considering Amoxicillin is not used to treat viral infections like RSV, flu, or COVID.

"An antibiotic is not appropriate for a viral infection and vice versa, so it's really important to know the difference," Johnston said.

What To Know About Over-The-Counter Hearing Aids

New access to hearing aids over the counter has raised questions on eligibility and the difference between them and ones from the doctor's office.

The largest makers of Amoxicillin say the shortages are part of a "demand increase" or simply "other" on the FDA’s database.

Newsy reached out to Israeli-based Teva Pharmaceuticals about their transparency. They didn’t respond to requests for comment.

Meanwhile, doctors like Steven Keen don’t want anyone to panic because there are plenty of alternatives that can help treat flu-like symptoms.

"I would recommend they take Tylenol, Motrin every three hours, supportive care, hydrate, rest, those sorts of things," Keen said.

Americans are contending with dozens of medication shortages this winter, a majority of which are generic drugs. Those are more common than name-brand shortages because there are fewer generic manufacturers. If there's a problem like a lack of raw materials or contamination, production stops. Existing supply runs out quickly and it's difficult to make up the shortfall.

Name brands like Adderall have been on the FDA's list of back-ordered meds since mid-October. One Colorado pharmacist told the Denver Post she expects the problem to last well into the new year. Production delays are linked in part to labor shortages, combined with the rise in doctors diagnosing patients with ADHD through telehealth services during the pandemic.

Audit numbers from the data analytics firm IQVIA found Adderall prescriptions jumped 16% last year to over 41 million. As patients wait for their pills, health experts advise folks to talk with their doctor about other options.

"We can sometime change the dosing of extended release or we can change brands or products, there are kind of cousins of Adderall that you can use," said Pediatrician Elizabeth Hawse.

Adderall Shortage Persists Across U.S. As Number Of Users Increases

A nationwide Adderall shortage is leaving patients with ADHD without medication or forcing them to switch to an alternative.

Diabetics are going through similar problems, after the viral popularity of injectable drugs called "ozempic" or "Wegovy" that comes with the side effect of weight loss. The hashtag "ozempic" on TikTok has racked up nearly 300 million views.

Even tech mogul Elon Musk is in on the craze, tweeting in October that Wegovy was partly behind his weight loss.

"Because of the unfortunate TikTok trend, we're running out of ozempic for diabetics. And the manufacturers are telling us that they really won't catch up on production until maybe next year, well into 2023," said Dr. Frank Chae, who works at Sky Ridge Medical Center.

Doctors say it’s typical to prescribe medications for "off-label" use, meaning for a reason other than the drug’s intended purpose. But endocrinologist Dr. Disha Narang tells the New York Times she worries people will associate ozempic with "vanity" and "not as a critical medication for diabetes patients."

The FDA says it works with manufacturers to address quality problems all year long, from wrong expiration dates to contaminated products. When the agency can’t resolve a shortage quickly, the government may look for a new company to re-direct its products to the U.S.

If you’re struggling to get your prescriptions, the FDA recommends asking your doctor about alternative medicines. Pharmacists also say it's best to plan ahead so you don’t run out of the drugs you need most.