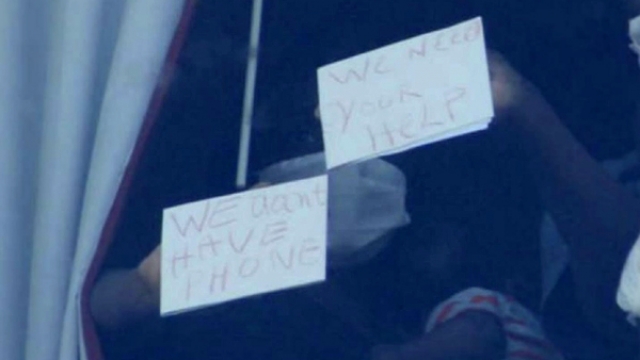 The government is using a heahthcare emergency law to expel most migrants reaching the border without letting them see a lawyer or claim asylum.

For months, the Trump administration has been using an emergency coronavirus order to swiftly expel most migrants seeking asylum at the border without giving them access to lawyers or the opportunity to make an asylum claim.

As part of the policy, ICE has been holding migrant children in undisclosed hotels before flying them back home.

But there's a new effort under way to put an end to it.

"They are resorting to these black sites and keeping these children in these secret sites sometimes for days, sometimes for weeks, completely incommunicado," said Karla Vargas, a senior attorney at the Texas Civil Rights Project.

The Trump administration says these summary expulsions, which bypass traditional deportation proceedings, are necessary to protect the country and border agents from the spread of the virus.

"A single COVID illegal alien could infect hundreds of other illegal aliens as well as our workforce. It would be catastrophic," said Mark Morgan, the acting commissioner at U.S. Customs and Border Protection.

"We're simply asking for the government to follow the law and allow these children to ask for asylum," said Vargas.

Vargas is one of the attorneys on the new lawsuit. She says holding kids in hotels for extended periods of time and expelling them without considering their fears of persecution and torture violate federal laws.

"It is absolutely the worst violation of every single law protecting asylum seekers," said Vargas.

Last month, Vargas' colleagues at the Texas Civil Rights Project found out about a hotel in McAllen, Texas, where contractors were holding migrants. They tried to visit the migrants' hotel rooms but private guards shoved them away.

"Our only goal was to get information about these children: to get their names, date of birth and then information that we needed to represent them in a lawsuit," said Andy Udelsman, the attorney in the video.

After the video of the incident went viral, the hotel stopped accepting reservations from the contractor. But Homeland Security says it's still using other hotels to hold migrants.

"What are they doing when the camera is not rolling?" asked Vargas.

She hopes to find out more about the secretive policy as part of the new lawsuit. But first, she and her co-counsels are asking the court for the right to represent all unaccompanied minors who are or may be affected by the policy in the future.