Extraterrestrial Life May Be Only 14 Light Years Away 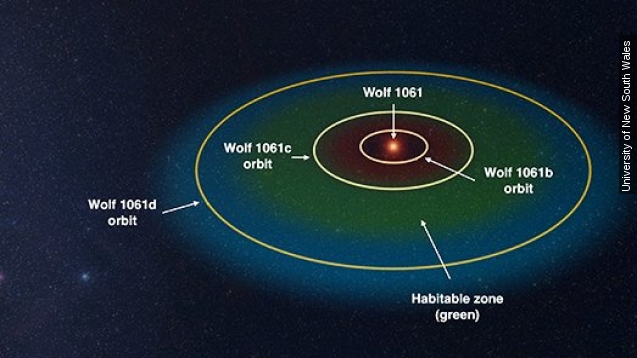 Australian researchers have discovered a planet called Wolf 1061c, and its position relative to its star could allow for water ... and life.

Australian researchers have found the closest potentially habitable planet beyond our solar system to date. (Video via NASA)

Three planets orbit a red dwarf star called Wolf 1061 that's only 14 light years away from Earth. But only one, Wolf 1061c, falls within what's known as the "Goldilocks" zone –– not too close or too far away from its star to allow for water and, potentially, life as we know it.

Wolf 1061c is roughly four times bigger than Earth and takes 18 days to revolve around its star, which is much cooler than our sun.

It joins the ranks of a over a thousand potentially habitable planets, but many of those are hundreds of light-years from Earth. (Video via NASA)

The researchers think they'll be able to study 1061c in more detail because it's so close. If it passes across the face of its star, the researchers can test the planet's atmosphere to truly see if it could sustain life.