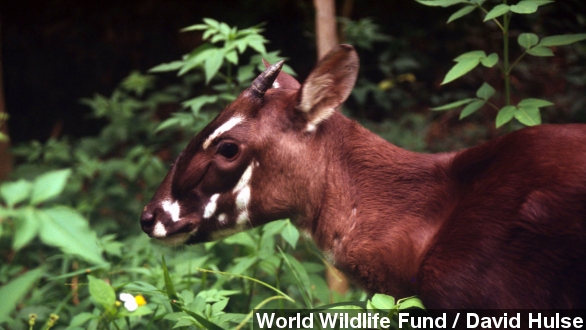 The saola or the 'Asian Unicorn' is one of the most threatened animals in the world. It was caught on camera in Vietnam for the first time in 15 year

It's the first time in the 21st century conservationists have spotted one of the world's most threatened mammals in Vietnam. The animal is nicknamed the "Asian unicorn."

"The saola, a long-horned ox, was photographed in a forest in central Vietnam back in September." (Via WAVE)

Los Angeles Times reports the last reported sighting of the saola in Laos in 1999, but it's been 15 years since it was last seen in the wild in Vietnam. As you can imagine there is very little known about the species.

The World Wildlife Fund, or WWF, announced the release of the photos of the very rare mammal on Tuesday.

In its statement, Vietnam's WWF director said, "This is a breath-taking discovery and renews hope for the recovery of the species."

"The animal was first discovered in remote mountain areas near the Laos border in 1992. It's the first large mammal that's new to science in more than 50 years." (Via KSTP)

Scientists aren't exactly sure how many saola still exist. "Estimate ranges from only a few dozen to maybe a few hundred." (Via WSIL)

"A forest ranger rescued a saola ox from hunters in Laos in 2010, but it died two months later in captivity." (Via WLIO)

CNN reports there are no saola currently being held in captivity.

​The WWF has been working very hard to protect the extremely rare animals. The organization reports the biggest threat to their survival has been poachers.

Most saola get caught in snare wires used by hunters, but "since 2011, forest guard patrols have removed more than 30,000 snares from this critical saola habitat and destroyed more than 600 illegal hunters' camps." (Via World Wildlife Fund)

According to CNN, environmentalists said Wednesday the new photos show the efforts to save the saola are working.