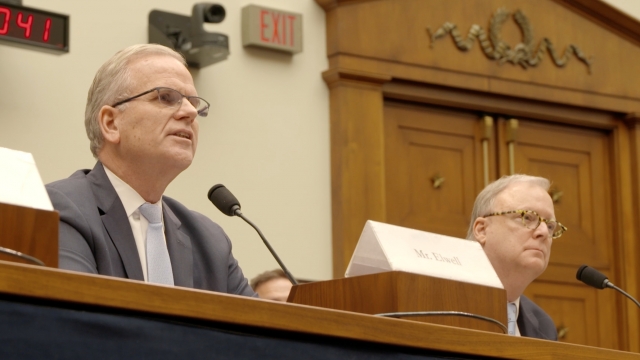 The FAA's acting administrator had tough questions to answer Wednesday. Dan Elwell sat before lawmakers on the House Judiciary Committee, curious why the FAA failed to catch problems with Boeing's 737 MAX.

At times, lawmakers got blunt, suggesting the FAA failed to properly oversee the plane's certification.

"I've asked it now three times," Mitchell said. "And to be blunt with you sir, with all due respect, I haven't gotten a direct answer. The committee deserves it."

"We'll get that answer for you, sir," Elwell responded.

Lawyer Suing Over 737 MAX Crash: Never Seen Anything 'Quite Like This'

Brian Kabateck represents 12 Indonesian families suing Boeing over the Lion Air flight 610 crash. He says the FAA needs a check of its own.

Concern of the MCAS' failure rests in two sensors on the front of the jet. They tell the plane if it's pitched too high, and automatically push the nose of the plane down if just one sensor says it is.

If that sensor is wrong, the original system design still triggered the MCAS. An update will change that, but engineering basics dictate redundancy.

So why didn't the FAA mandate a change?

"Why would [the MCAS] trigger with a single point of failure?" Rep. Peter DeFazio, D-Or., asked.

"A single point of failure means that if that component or that part of the aircraft fails, it will lead to an accident," Elwell said.

"Well, in this case it led to triggering the MCAS, which is safety critical," DeFazio said.

Lawmakers also wondered why the FAA waited so long to ground the 737 MAX after the second crash in Ethiopia in March?

"We were the first country to ground because of the data that linked the two accidents," Elwell retorted.

"It just seems like common sense should have taken control," Rep. Steve Cohen, D-Tn., said. "Data's fine, but sometimes it's just right before your eyes."

The hearing came on the heels of a new audio release documenting a tense meeting between Boeing representatives and American Airlines pilots.

Boeing CEO Says He Intends To Stay On, Suggests Pilot Error In Crashes

The meeting happened a month after the first crash in Indonesia, but months before the second. At the time, Boeing pushed back on the idea of making an emergency fix to the MAX.

Brian Kabateck, a lawyer suing Boeing over the crash in Indonesia, says the audio could hurt Boeing's legal case.

"Kinda shows to me a custom practice of disregarding the rights of others," he said.

Kabateck told Newsy his case might not see too much impact from the new audio, but cases against Boeing over the Ethiopian Airlines crash could. He makes the case that Boeing's reluctance to ground could show profits came above safety.

"If they had listened to those pilots and grounded the aircraft," he said, "they could have saved lives, there's no question about that in my opinion."

The man likely to soon take over at the FAA had his own hearing Wednesday. Steve Dickson, a former Delta Airlines pilot and executive, had his confirmation hearing in front of the Senate Commerce Committee. He said Wednesday he'll implement any recommended oversight changes at the agency.

"Whatever corrective actions need to be taken, or process changes need to be put in place, I can guarantee you that those will be accomplished," He said. "I would never certify an airplane that I wouldn't put my own family on."