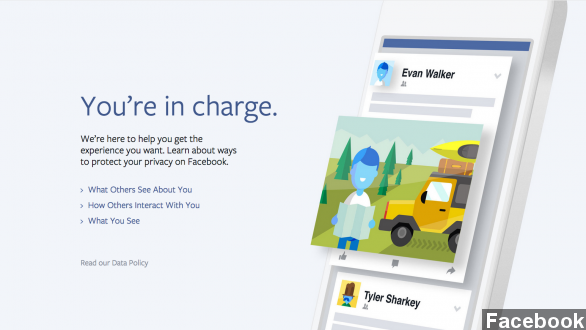 Facebook simplified its privacy and data policies, but the company isn't changing how much data it collects from you.

Sharing photos, videos and status updates on Facebook can be a little troubling at times — Who will see those posts? How can you limit who likes and comments on them?

By updating its privacy and data policies and introducing "privacy basics," Facebook is aiming to make the answers to those questions — and a whole lot more — a bit easier to find.

As The Wall Street Journal points out, Facebook has been criticized for its dense terms which make it difficult for users to understand how Facebook uses their data.

The updated policy is one-third its original size. That's 2,700 words instead of the unwieldy 9,000 of yesteryear.

It's important to note while the policy has been updated, the data Facebook is collecting remains the same. Essentially, this is an attempt to better educate users on its current data-collection policies; Facebook's not backing down on the amount of data it collects.

And a writer for Slate suggests there might still be a bit of murkiness in Facebook's updated policies. While its "privacy basics" page is full of animated tutorials, its data policy page — the place where Facebook explains the information it's collecting on its users — isn't as compelling or as explanatory.

"With its new privacy basics page, Facebook is shining a light on the former in a way that might overshadow the latter. ... it’s the incredibly detailed data that Facebook collects about you that forms the basis of its multibillion-dollar advertising business."

In other words, there's not a whole lot you can do about Facebook collecting your data. But at least you have a better understanding of all the data it's collecting, right? Well, that's what Facebook hopes you'll think.