Facebook Wants You To Help Fight Ebola With Your Phone 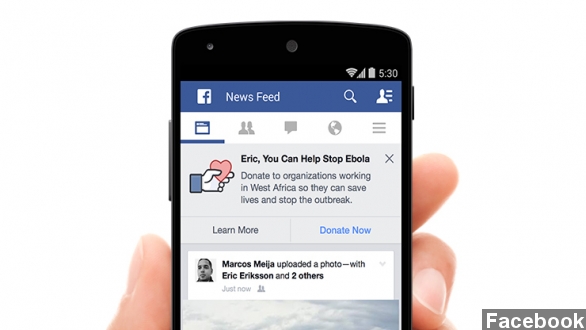 Facebook is jumping into the fight against Ebola by inviting users to donate and by targeting those in Ebola-afflicted areas.

Any regular user of Facebook has probably came across Ebola headlines in their news feeds. Now news about how Facebook itself is fighting the disease.

That donate feature will allow users to donate to the International Medical Corps, American Red Cross or Save the Children. They can then share the fact that they donated.

The public health information is provided with the help of children's rights organization UNICEF and will appear in news feeds of those who are near Ebola-afflicted areas.

The third initiative is in partnership with 41 international NGOs and will provide voice and data access for health care workers so they can better keep track of Ebola's spread.

While the donation feature will be avaiable to any Facebook user, the other two initiatives look to be primarily focused on Africa — something Re/code says is significant given roughly half the continent's 200 million Internet users go to Facebook.

Facebook has allowed users to donate directly through their news feed before.

In November 2013, the social media company helped users donate to the International Federation of Red Cross and Red Crescent Societies to aid those affected by Typhoon Haiyan in the Philippines.

But a writer at The Verge notes, the extra effort put into this initiative is an unusual abundance of activism for Facebook — it "sets an important precedent for Facebook as a public body exercising a social conscience." (Video via Facebook)

The latest report from the World Health Organization says more than 4,800 people have died during this Ebola outbreak with more than 13,000 cases overall.